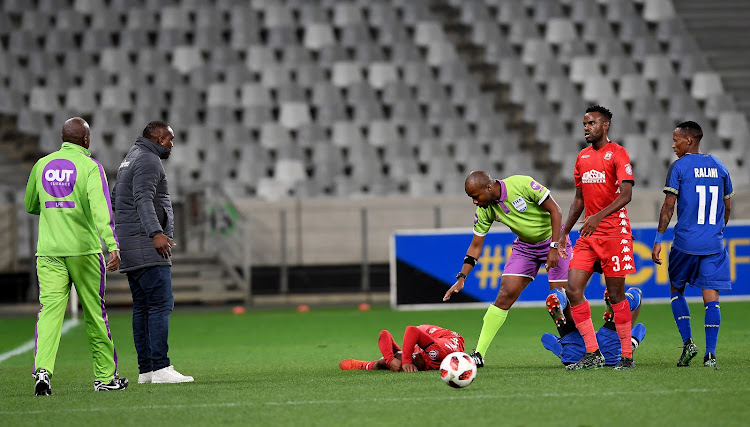 Benni McCarthy says he wants Victor Gomes to referee Cape Town City’s Absa Premiership clash with Orlando Pirates on May 4 as he again hit out at the treatment of his team by match officials this season.

But McCarthy won’t get his wish as Gomes will be in Lubumbashi on the same day to handle the Caf Champions League semifinal‚ second leg‚ between TP Mazembe and Esperance that will arguably be one of the biggest tests of his career.

But his point is that there are too few match officials in the league this season with the necessary experience to handle big games‚ as he cut a conspiratorial tone in the wake of the 1-1 draw with Highlands Park on Tuesday.

McCarthy had no qualms with the red card handed to Kermit Erasmus‚ but says there were too many poor decisions in the game from referee Eugene Mdluli.

“When you see games like that‚ I don’t want to see what is happening when we get Pirates‚” a livid McCarthy said.

“I’m not a big fan‚ but I hope they give Victor Gomes the match‚ one of the most experienced referees who takes no nonsense from anybody.

“He would be ideal for somebody to handle a game of that magnitude because Pirates are going to need three points against us to maybe win the league.”

City snatched a late equaliser against Highlands‚ but it was no consolation for McCarthy.

“I would rather we had lost‚ because that is what they wanted us to do. From the first minute we had to watch … and it is the same referee every time‚ every single time we get him … against Wits a ghost penalty out of nowhere and then he apologises.

“Every time they want to apologise for the s**t on the pitch. You as a coach you must just keep cool or you’ll be fined. But I don’t give two monkeys now‚ they can fine me whatever they want to fine me.

“This can’t go on longer. It is either the league step up and educate the referees properly or people like myself … I would rather take myself out of the equation because it is not worth coaching if you have to suffer every single time.

“You can’t even talk or ask why they give certain decisions. It is beyond a joke now.”

McCarthy is also waiting to see whether his side will have to replay the abandoned Absa Premiership fixture against Bloemfontein Celtic after it was called-off due to crowd trouble.

“The Bloemfontein Celtic game … we wait for the verdict of what will happen there‚ replay or no replay‚ will we get the points …” he says.

“The way the league is‚ I won’t hold my breath to say that something positive for us will come of it. With what we are going through‚ we will probably have to play‚ but we will see what the outcome will be.”