Fit-again Sibiya and Arrows aim for a top-eight finish 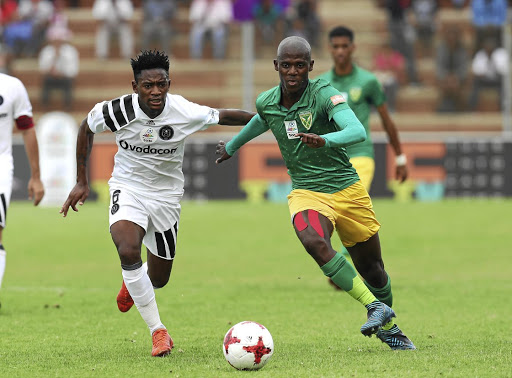 Golden Arrows attacking midfielder Nduduzo Sibiya is optimistic they will finish inside the top eight at the end of the season.

After missing the last four games - including their shocking 3-1 humiliation by NFD side TS Galaxy in the Nedbank Cup semifinals last week - Sibiya made a memorable return to the starting line-up against Kaizer Chiefs at FNB Stadium on Tuesday.

It was his delightfully curled strike, his first of the season, that broke the deadlock before it was cancelled out by Chiefs defender Kgotso Moleko's glancing header later on in the 1-1 stalemate.

"Ask me to repeat this at the end of the campaign ... Arrows will finish in the top eight," asserted Sibiya, who has featured 12 times in the league thus far.

"Even [against Chiefs] we let ourselves down by allowing them to equalise. Now our aim is to bag nine points from the three games left. This goal is special because it's my first this season. I have been troubled by injuries, but now I am feeling healthy."

In reality, Arrows were lucky to escape with a point because Chiefs dominated them throughout the proceedings. Amakhosi created numerous easy scoring chances but couldn't bury them, with the likes of Bernard Parker and Dumisani Zuma among the guiltiest parties.

While he refused to directly admit Chiefs were superior to them, Arrows coach Steve Komphela lauded his counterpart Ernst Middendorp for being unpredictable in the system he deploys.

"There's a tendency to probably look at the other team's inefficiency when the other team is dominant. Whether we were flat or we had to resist it's another story. It was always going to be tough playing against Chiefs. Middendorp is not one-dimensional, you never know which system he's going to play," said Komphela.

Kaizer Chiefs plucked a draw from the jaws of victory, having to settle for a 1-1 scoreline that belied their almost complete domination of ...
Sport
2 years ago
Next Article