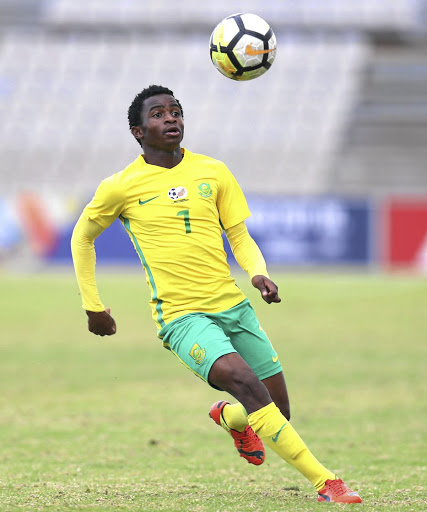 Amajita's Promise Mkhuma and his teammates failed to rise to the occasion despite their third-place play-offs win over Nigeria on penalties in the 2019 Africa Cup of Nations in Niger.
Image: MUZI NTOMBELA

Amajita's failure to register a single shot on target against Nigeria in the Africa Cup of Nations third-place play-offs summed up what was a substandard tournament for the Under-20 national soccer team on Saturday.

They had to rely on penalties to clinch the bronze medal in Niger after beating the Flying Eagles 5-3.

Goalkeeper Khululeka Kubheka saved Nigeria's first spot- kick before his teammates converted all theirs. The game had ended in a goalless draw.

It was Nigeria who dominated and created many chances, managing 20 shots at goal, with four on target.

Amajita registered only three shots at goal, but none of them was on target.

Notwithstanding achieving their primary objective of qualifying for the Fifa U-20 World Cup in Poland from May 25 to June 16 this year, truth be told, Amajita were far from convincing throughout the tournament as they hardly dominated their opponents.

The goals came from a free-kick (thumped home by Siphesihle Mkhize in the opening match against hosts Niger) and a penalty (scored by Luke le Roux against Burundi in the last group match).

Perhaps the only positive of their game, the South Africans were disciplined and solid at the back.

They conceded only two goals in the entire tournament (in their 1-1 draw against Niger and against Senegal in the semifinals, 1-0).

Foster's French club, Monaco, refused to release him for this biennial youth tournament.