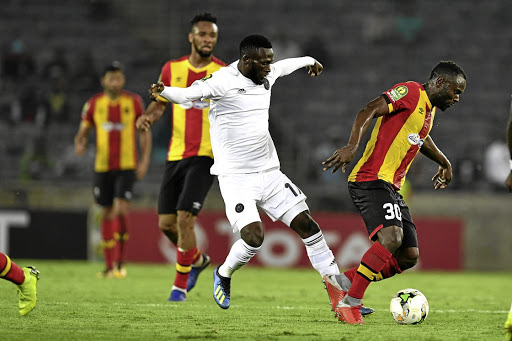 Tunisian giants Esperance dented Orlando Pirates' hopes of qualifying for the knockout phase of the CAF Champions League after beating them 2-0 at Stade Olympique de Rades in Tunisia yesterday.

Going into this clash, Pirates and Esperance were level on five points at the summit of Group B. Bucs must now win their next group match against Zimbabwean side FC Platinum next month to stay in contention.

Except for the corner kick Pirates got inside the first five minutes of the match, which was fluffed by Thembinkosi Lorch, it was Esperance who created many goal-scoring opportunities in the opening stages of the game.

The match was played behind closed doors as a punishment to Esperance by CAF for their supporters' unruly behaviour.

It was Anice Badri who was in the thick of things for the Tunisians, changing the flanks and leaving the visitors' wing-backs in Innocent Maela and Asavela Mbekile rather puzzled.

The home side's dominance paid off in the 16th minute when Youcef Belaili sneaked in a low-driven free-kick into the box, enabling Badri to beat a hapless Wayne Sandilands into the far post. The Bucs defence was somewhat flat in defending that resultant set-piece.

The likes of Xola Mlambo and Justin Shonga saw their berths in the starting XI being taken by Linda Mntambo and Paseka Mako.

After putting in a man of the match display in the derby, holding midfielder Ben Motshwari hardly won any midfield battle, while Augustine Mulenga was isolated upfront.

The pairs' below-par performance was the centre of the Sea Robbers' subjugation.

Seeing that Mulenga was lonely and struggling to trouble the hosts' defence, Pirates brought in another striker in Thamsanqa Gabuza early in the second half.

Anice Badri scored one goal and set up another as African Champions League holders Esperance comfortably defeated Orlando Pirates 2-0 in their Group ...
Sport
2 years ago

Gabuza's introduction compelled the South Africans to play long balls into the box but, relying on their height, the Esperance rearguard managed to keep Gabuza at bay.

After a number of vital saves in the second half, Sandilands went from hero to villain when he misread a long ball and came out of his area. He was punished by Haythem Jouini who easily finished the game off by scoring the second goal.

Meanwhile, Mamelodi Sundowns were held to a 0-0 draw by Asec Mimosa of Ivory Coast in Group A.