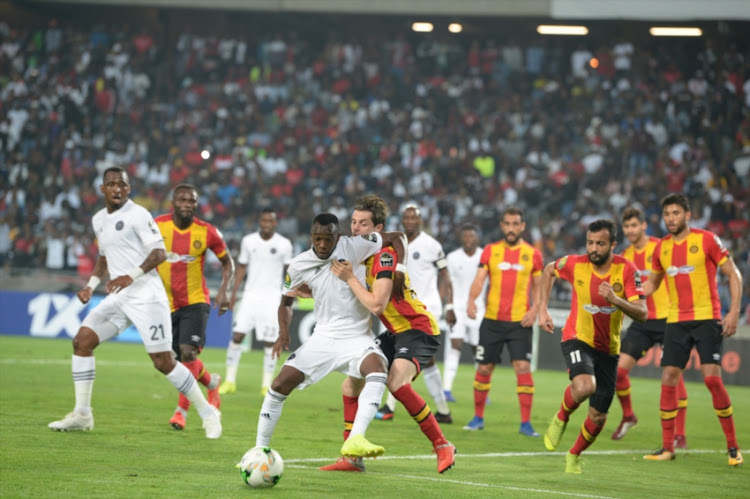 Watched by a remarkably decent crowd for a 9pm kickoff at Orlando, and who grew impressively louder as Bucs established a dominance in the second half, Pirates matched Esperance in the first half and increasingly edged them in the second.

The Soweto giants stroked the ball around with confidence from the back to the front, patiently prying openings, and in tactics often outwitted their big North African opposition - who were completely unsurprisingly defensively laid out.

But at the step-up level of the Champions League chances need to be taken.

Pirates remain top of the group at the halfway stage on goal difference from Esperance, who are also on five points though have a home fixture against Bucs in Tunisia in the second round to look forward to.

The first half was tight and tactical, with chances few to come by.

Esperance, in the mould of the big North African clubs, are masters at the cautious approach away from home, absorbing and waiting for that one error for a chance to sneak a winner, with a draw acceptable if it does not come.

From a free-kick early on left midfielder Youcef Belaili had a shot blocked.

At the other end, on a rare occasion where Esperance gave the ball away, Justin Shonga ran through and rolled a shot a whisker from the right upright.

Pirates needed to up the ante from the break to avoid playing into Esperance's gameplan. They did, and their dominance grew, as increasingly Esperance were pressed back.

Bucs pried openings. Vincent Pule's stinging drive from the right of the area was tipped over by goalkeeper Rami Jeridi.

The home team had their best chance in the 65th when, from an excellent passage of possession play, they worked the ball down the right and Thembinkosi Lorch's cross was turned towards his own goal by centreback Mohamed Ali Yakoubi to force a save from Jeridi.

Pule steamed onto the loose ball only to see it desperately cleared by Chamseddine Dhaouadi.