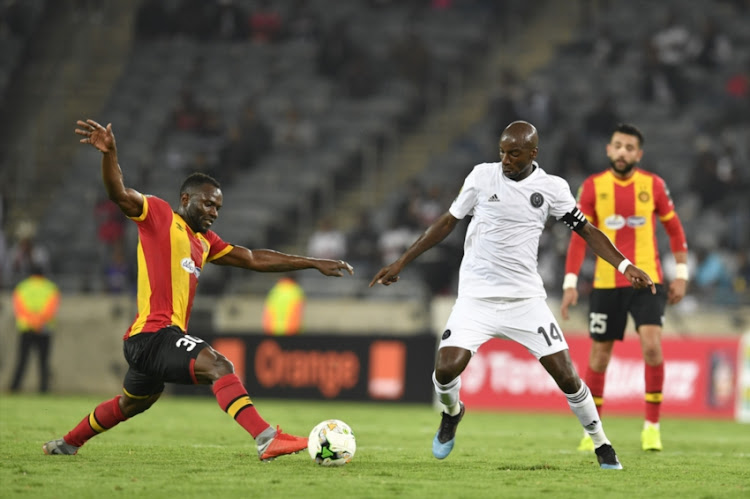 Anice Badri scored one goal and set up another as African Champions League holders Esperance comfortably defeated Orlando Pirates 2-0 in their Group B clash at the Stade Olympique d'El Menzah in Tunisia on Tuesday.

The result brought to an end a 27-game unbeaten run in all competitions for The Buccaneers‚ who had not lost since a 1-0 Absa Premiership defeat against Bloemfontein Celtic on August 19.

But having failed to create much in front of goal‚ Pirates can have little argument with the result in a fixture in which they were always second best.

Esperance head the pool with eight points from four games‚ with Pirates in second place on five‚ though they could be knocked out of the top two if Guinea side Horoya defeat FC Platinum from Zimbabwe later on Tuesday.

The match was played in front of empty stands‚ which should have been an advantage for Pirates‚ after Esperance were punished by the Confederation of African Football (CAF) for fan misbehaviour earlier in the competition.

Pirates coach Micho Sredojevic made three changes from the side that drew 1-1 with Kaizer Chiefs‚ bringing Paseka Mako‚ Linda Mntmabo and Augustine Mulenga into the side for Musa Nyatama‚ Xola Mlambo and Justin Shonga.

Badri opened the scoring from a simple free-kick routine as he was fed on the left-hand side and with the Pirates defenders expecting a high ball into the box‚ the Tunisia international had a simple finish.

Sandilands made an excellent stop to stop his side slipping further behind as Ghilane Chalali shot from 12-yards‚ but could not beat the keeper.

Substitute Shonga had the first real shot in anger on 65 minutes when he collected the ball in the box and struck a low shot on the turn that went just wide of the post.

But Esperance continued to create the better chances‚ especially from set-pieces‚ and Ivorian midfielder Fousseny Coulibaly saw his header pushed around the post by Sandilands.

Vincent Pule received a yellow card that means he misses the vital home game with FC Platinum on March 8‚ before Shonga flashed a free-kick narrowly wide.

Esperance made sure of the points in the dying minutes with a deserved second goal as Badri set up Haythem Jouini for a simple finish.