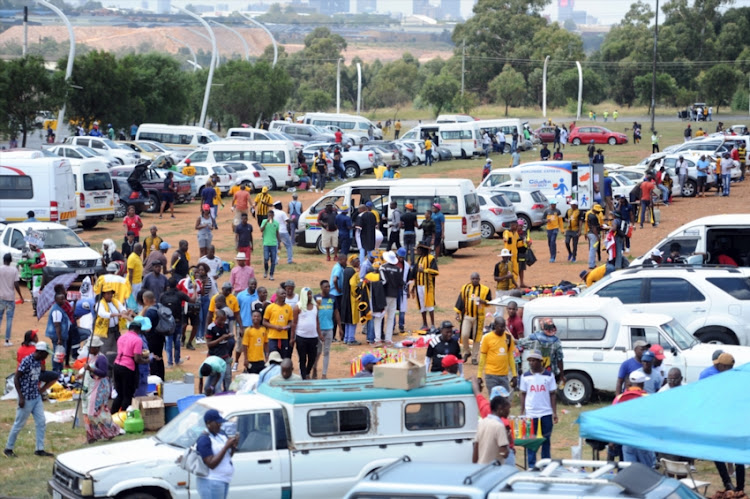 Hundreds of car guards surround FNB on the day of derbies when 90‚000 football supporters‚ some 50‚000 by car‚ converge on the stadium for the famous match between Kaizer Chiefs and Orlando Pirates‚ as they will this Saturday for an Absa Premiership fixture.

Grobbelaar said SMSA‚ who manage FNB Stadium‚ had been informed that SAPS officers from Booysens Police Station‚ along with community police officers “will be picking up illegal car guards and charging them”.

He said the organisers of the derby had established in their event safety and security planning (ESSP) meetings that the illegal car guards are a source of traffic congestion‚ as they direct traffic to park in wrong places‚ and charge patrons money for that.

Grobbelaar stressed that parking on the official allocated fields for the derby is free‚ and does not require a parking ticket.

“I was astounded this week still to see questions on social media on‚ ‘I can't find a place to buy a parking ticket’. And it’s been promoted and marketed on all platforms‚” the Grobbelaar said.

“There are no parking tickets sold at the venue. It’s free parking for everybody.

“The first problem created with that is the illegal car guards. They convince people to park along the route‚ where they shouldn’t‚ influencing the traffic management plan.

“And‚ I don’t want to generalise‚ but a lot of those people are the ones who are the pickpocketers and involved in petty crime.

“So don’t make use of the illegal car guards. There are legal guards‚ identified with the bibs from Bee Free‚ and they will direct people – this time around with lollipops – to the general parking‚ hospitality parking and VIP parking.”

A problem for access to FNB for major events recently has been that train services are currently not running to Nasrec Station due to tracks having been stolen.

Grobbelaar said the Rea Vaya public bus service have increased their capacity by 30 percent on Saturday and can carry 14‚000 people to and from FNB.

“We need to get 87‚500 people into the stadium. Negotiations with all roleplayers ensued and it was determined that we need to get 22‚500 via public transport into the venue‚ leaving is 52‚250 via private vehicles‚” he said.

“One thing we get lambasted about after each event is why the Gauteng train service is not operating.

“The tracks are stolen. Negotiations have confirmed that will take at least another two years.

“At the previous derby one of the things people complained about was ... a lot of pushing and shoving leaving with the Rea Vaya buses.

“So we have increased the safety and security deployment there. SAPS undertook to employ officers there.”

Chiefs and Pirates are meeting in the 166th Soweto derby.