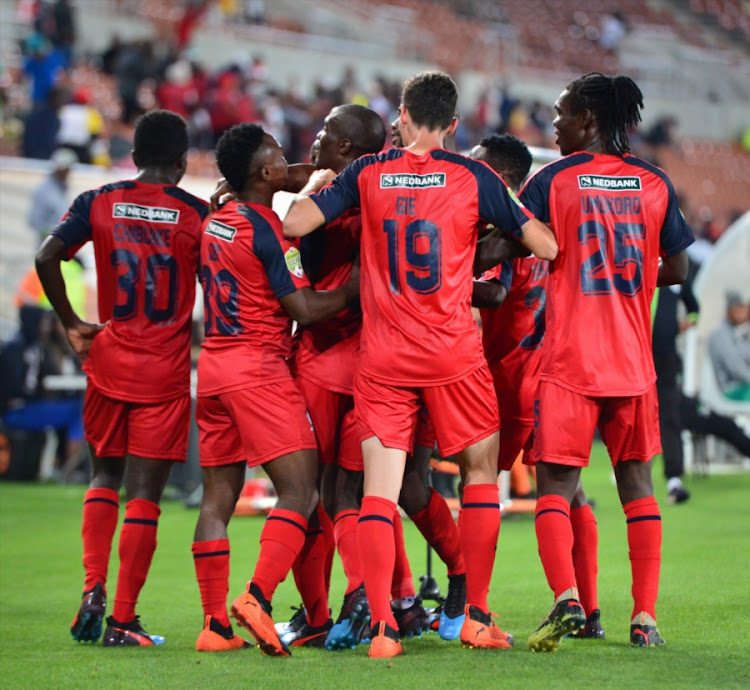 Inky Masuku of Jomo Cosmos celebrates his goal with teammates during the 1-0 Nedbank Cup first round win to knock Baroka FC out of the competiton at the Peter Mokaba Stadium in Polokwane on Tuesday January 29 2019.
Image: Philip Maeta

Jomo Sono brought back a glimpse of past golden days as his Jomo Cosmos side upset Baroka FC 1-0 in the first round of the Nedbank Cup at the Peter Mokaba Stadium in Polokwane on Tuesday.

A 30th minute goal from Inky Masuku separated the two sides and ensured Cosmos became the fourth side from the National First Division to upset top flight opponents in the last 32 of this year’s competition.

Cosmos, winners of the trophy in 1990, are the last side to go into Thursday’s second round draw after an opening round full of shock results.

“We knew we had a chance,” said the ‘Black Prince’ Sono after the match. “We protected what we had once we had the goal.”

Cosmos showed some naivety in defence and were swamped in midfield yet caught Baroka time and again with their pace upfront, creating breakaway chances.

They faded markedly in the second half as their fitness was tested to the maximum but still showed grit to hold Baroka, who looked superior, had more possession but could not finish.

Cosmos debutant Lethlogonolo Kekana, just 20-years-old, was exciting on the right, if somewhat over-exuberant, and the Nigerian striker Chibuike Ohizu would not look out of place in a top flight team.

Ohizu set up the opening goal when he received a quick, searching ball from the defence, before pulling it back for Masuku to net only his second goal of the season.

Ohizu had struck a fearsome shot earlier to keep Baroka goalkeeper Elvis Chipezeze on his toes.

But Baroka were also guilty of some poor misses in front of goal, first Tebogo Sodi with a point-blank header in front of goal and then Tshidiso Patjie, after he had snuck around the back of defence and had the goal at his mercy.

Jemondre Dickens also had the ball in the net not long after Cosmos goal but was clearly offside.

In the second half there were fewer chances as a tiring Cosmos were forced onto the backfoot but they were not going to give away their chance at glory and kept the hosts at bay until the final whistle brought enthusiastic celebrations.

The Premier Soccer League (PSL) are going to fight tooth and nail against the proposed Independent Communications Authority of South Africa (Icasa) ...
Sport
2 years ago