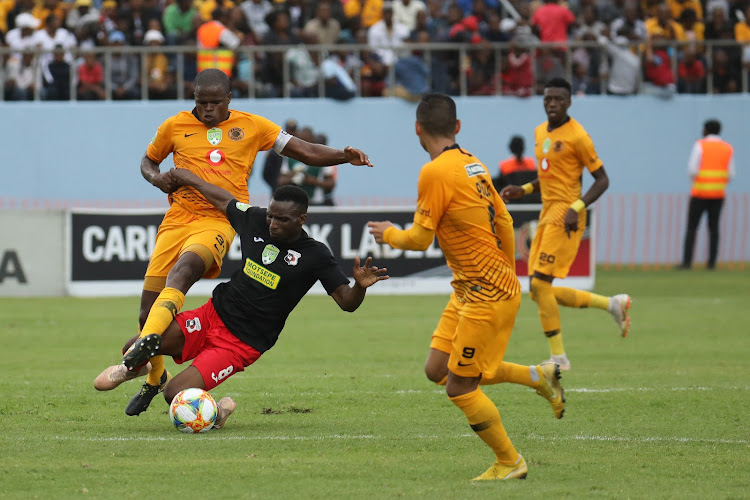 Vuyisile Ntombayithethi of Tornado clashes with Kaizer Chiefs players Willard Katsande and Gustavon Paez during the 2019 Nedbank Cup match between Tornado and Kaizer Chiefs at the Sisa Dukashe Stadium,Mdantsane on the 27 January 2019.
Image: ©BackpagePix

After another inept performance in front of goal‚ Kaizer Chiefs coach Ernst Middendorp has admitted that he is concerned about their scoring abilities and a lot of work is needed to make the side an effective attacking unit.

He said this after their narrow and nervy 1-0 win over Eastern Cape amateurs Tornado FC in Mdantsane on Sunday in the first round of the Nedbank Cup‚ where they needed an extra time own goal to progress to the last 16.

“We made it difficult and the biggest issue‚ is what we saw throughout the game‚ is the finishing. We didn’t get in any powerful shots and this is my biggest concern at the moment‚” he said.

“But‚ OK‚ this is nothing new to me. We were in a game where we had to produce‚ to dominate and to make options. But games like this are never any easy task.”

Chiefs in the last decade have fallen four times in the Nedbank Cup to lower league opponents having never suffered that indignity before 2009.

Tornado‚ while on the back foot for much of the game‚ looked like they might take Chiefs all the way to the lottery of penalties before Abongile Twini’s own goal offered Middendorp and his charges respite.

“You can’t go into these games just thinking you are going to score easily but the result is what counts.”

Middendorp‚ who has now had nine games in charge since his surprise appointment in December‚ said Chiefs penetrated into space better than they had in previous matches.

“Against Zesco‚ we were just passing left and right and back left and right again. This time there was more out of defence from Teenage Hadebe‚ Daniel (Cardoso) and Khotso (Moleko).

“We were driving forward with the ball and this we haven’t done that much before‚” he continued.

“But the centre was packed. We tried some variation in the second half mixing the short passes through the middle with longer balls to try and stretch their defence. It was obvious to see that we need to produce a better flow and a better understanding. It’s difficult to play against such a defensive block but we had our opportunities. We could have done that better. Especially when we get the cut backs and we don’t have enough power to finish them.

“I’m aware of this (problem) and we have to design more training sessions to work on this with the players.”

He will not be able to do that immediately‚ however‚ because Chiefs are back in action on Wednesday in a hastily re-arranged league clash against Cape Town City at Soccer City.