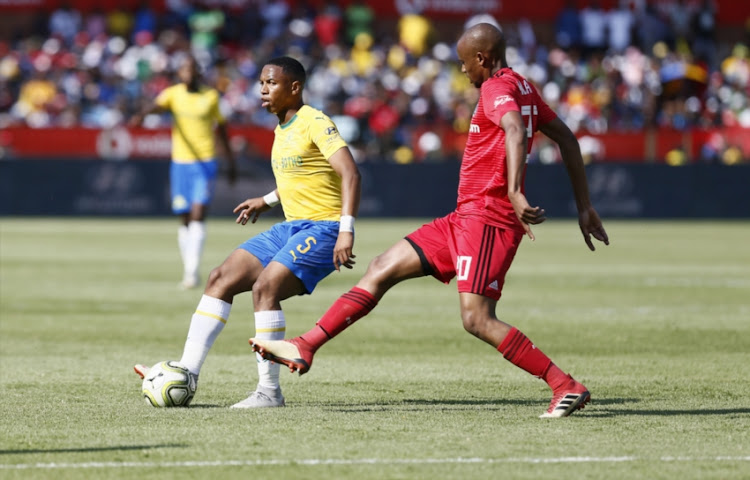 It may have been the first goalless draw between the Orlando Pirates and Mamelodi Sundowns in seven seasons but this one will be remembered more for happenings off the field than on it.

They detracted from what was an exciting game that was short of goals but high on drama.

Orlando Pirates again bossed Sundowns, continuing the trend from last season but will be happy with the point that at the time of writing, kept them at the top of the log.

Sundowns remain unbeaten but they were far from convincing.

What should have been an exciting game degenerated into a farcical festival of off-the-field shenanigans.

The first took place before kick-off when there was a squabble between Pirates’ security detail and the stadium security when Pirates arrived at the stadium.

Then there was the unruly Mamelodi Sundowns fan who inexplicably found his way to the Orlando Pirates bench where he seemingly had choice words for Pirates’ assistant coach Rhulani Mokwena.

How the fan wandered from the stand to the technical area again raises the serious matter of stadium security, especially at Loftus Versfeld, for Category A matches at the Sunnyside venue.

Rapid deteriorationIt was at this venue on February 11 last year when irate Pirates fans took matters into their own hands during a 6-0 rout where they not only invaded the field, but trashed broadcasting equipment.

The situation rapidly deteriorated into an us and them matter between the two benches and a visibly riled Mokwena, who unwittingly found himself in a social media cyclone because of former Sundowns midfielder Bongani Zungu, told the clearly frazzled referee Daniel Bennett that he’s not secure in his technical area.

Sundowns coach Pitso Mosimane’s blood was also up and the technical area fracas meant nine minutes were added on top of what was a high octane but nervy first 45 minutes.

The physicality extended onto the field where the hosts in particular, were on the right side of Bennett’s officiating. Uruguayan Gaston Sirino got away with two rash tackles on Pirates midfielder Xola Mlambo.

Sundowns in general manhandled the skilful Pirates midfielders but ironically had the better first-half chances.

Jeremy Brockie should have scored in the first minute when a delicate Andile Jali pass split open the Pirates defence.

Brockie’s shot, with only Siyabonga Mpontshane to beat, went horribly wide. Lyle Lackay also had a rasping 12th-minute shot from range that fizzed narrowly over the bar.

However, the visitors, who went into the game on an eight league match unbeaten streak, had the better of first-half exchanges.

Sundowns had to deal with the early loss of Andile Jali to a hamstring injury. Pirates started the second half better and had three poor shots from Thembinkosi Lorch and Vincent Pule not testing Denis Onyango.

Sundowns warmed into the second half through a Sirino 51st minute shot that went wide but Phakamani Mahlambi's 61st minute introduction gave the hosts the spark missing in the first half.

A minute after he came on, Mahlambi skinned the Pirates defence for pace but his shot was saved by Mpontshane.

The game ebbed and flowed like most Pirates and Sundowns game do but there were no goals to appease the large crowd that braved the oppressively hot conditions.