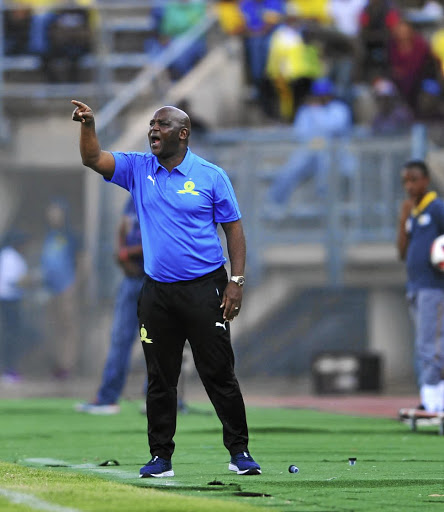 Mamelodi Sundowns will put their impressive unbeaten streak on the line against the very team that handed them their last defeat.

The last time the Brazilians suffered a loss in the league was back in January at the hands of Orlando Pirates (3-1).

Since then the eight-time Premiership champions have had a run of 22 games without tasting defeat with 12 wins and 10 draws in the league.

The Tshwane outfit and the Buccaneers will take centre-stage once again in a rematch at Loftus Versfeld tomorrow (3.30pm).

Sundowns coach Pitso Mosimane conceded that it will be another entertaining encounter against the Soweto giants who he feels are even stronger than they were the last time they met.

"Of course, they are the favourites and the facts are there. Look at their past few games... we are in teething stage," Mosimane said.

"We are a team in transition but that is part of football... it's not an excuse. It will be a difficult game for us and they are a good team which is free-flowing and are confident.

"They play with so much energy, they are fearless and confident, and it's unbelievable. Probably, we will have a thriller and why not?"

Mosimane also compared the form of both teams, saying that the difference was that his team tends to be goal-shy while Pirates are free-scoring.

"Our challenge is the number of goals we score, but on goals conceded we have not had a problem there, our defence is good.

"Their strength is attacking and scoring goals and score more than anybody else in the league.

"The coach [Milutin Sredojevic] has an impressive CV."

Five points ahead of the champions, Pirates could stretch their margin further but a defeat would be disastrous as Sundowns still have three games in hand on the league leaders.

It's been 22 matches, stretching over 11 months, since Mamelodi Sundowns lost an Absa Premiership match. Can Orlando Pirates put the Brazilians to the sword again and end their unbeaten run?

Kaizer Chiefs hold the record for the longest unbeaten run in the league. Amakhosi went 31 matches without defeat which stretched from the 2004/2005 to the 2005/2006 season.

It started at the time when they were coached by the late Ted Dumitru that resulted in them winning the title and continued under Ernst Middendorp the following season, before they were stopped in their tracks by Silver Stars, who beat them 4-2 in November 2005.