Jeremy Brockie set to start for Sundowns against Pirates 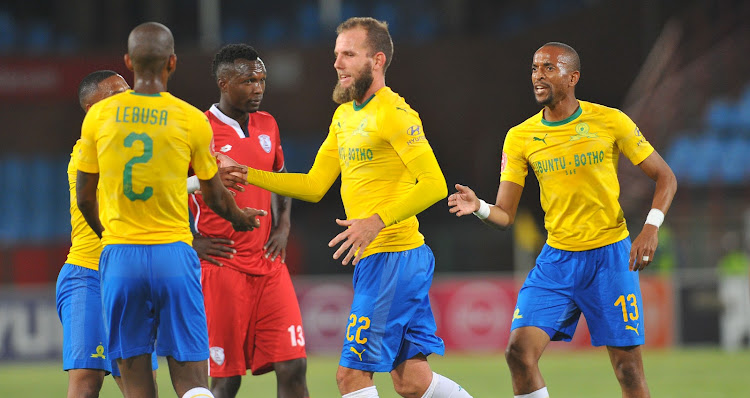 Mamelodi Sundowns striker Jeremy Brockie celebrates with teammates after scoring his first goal for the club during the 3-1 Absa Premiership win over Free State Stars at Loftus Versfeld on November 7, 2018.
Image: Sydney Mahlangu/BackpagePix

Mamelodi Sundowns striker Jeremy Brockie will be rewarded by coach Pitso Mosimane with another place in the starting lineup in the crunch Absa Premiership encounter against Orlando Pirates at Loftus on Saturday.

Brockie scored his first goal for Sundowns since he arrived at Chloorkop in a much-publicised move from SuperSport United in January in the convincing 3-1 league win over Free State Stars at Loftus on Wednesday.

Pressed on whether Brockie will start this weekend‚ Mosimane hinted that the big New Zealander will lead his attack against the Buccaneers.

“If you know me‚ you can answer the question of whether Brockie will play against Pirates or not‚” said Mosimane.

“I am happy for him that he scored the goal. Sometimes I asked myself: ‘Is this the same guy who scored double figures every year?’‚ because we feel sorry for our players when they are trying hard and not getting it right.

“I am happy also that Aubrey Ngoma started‚ even though you can see that he is still rusty‚ but the talent and potential is there.

“He still needs game time and in the 60th minute you can see that he slowed down hence we substituted him.

“Lebohang Maboe is a young player who is still inexperienced but he works hard and needs some time.”

Brockie‚ who did not come cheap from SuperSport United when he signed for Downs‚ was under immense pressure from the Brazilians’ fans to break his duck as he had gone over a year without a goal in competitive football.

“Supporters are happy when you score and they are angry when the team lose‚ but one good thing about our supporters is that when we lose they still sing‚” Mosimane said.

“We lost to Baroka in the cup [Telkom Knockout] but they were singing and we must give them credit for that. They are spoiled because they are used to winning.”

Mosimane is also said that if first choice goalkeeper Denis Onyango is passed fit by Downs’ medical team from a shoulder injury he will take his place between the sticks from Reyaad Pieterse‚ who looked suspect again against Stars.

“Onyango has a shoulder injury and hopefully he makes it but we did not keep him out for this game because of Saturday [against Pirates].

“We are still fixing him and if he is ready‚ he is our No 1 goalkeeper‚ and in Africa. You can argue whether he is No 1 in South Africa or not‚ but in Africa he is No 1.”

Mosimane said Pirates will arrive in the capital as hot favourites because of their recent performances.

“Let’s be honest‚ they are a free-flowing team‚ they are the favourites. They look good‚ they are noisy and they are on a high.

“They are winning every week. We just have to give them respect and do what we have to do.

“We would love to win because it is a big game‚ but they are favourites. If you look at them‚ it is still the same team of last year while we are rebuilding.

“Maybe Ben Motshwari and the Brazilian defender who is supposed to be better than Ricardo Nascimento [Marcelo Da Silva] are new.”

Jeremy Brockie might have taken a mammoth 11 months to finally score his first goal for Mamelodi Sundowns‚ but that did not stop the Kiwi striker ...
Sport
3 years ago

On-form Orlando Pirates will find an equally spirited Mamelodi Sundowns when they arrive in the capital for the eagerly anticipated Absa Premiership ...
Sport
3 years ago

It's been a year since Jeremy Brockie found the back of the net and former Bafana Bafana striker Phil Masinga says only time will tell whether the ...
Sport
3 years ago
Next Article