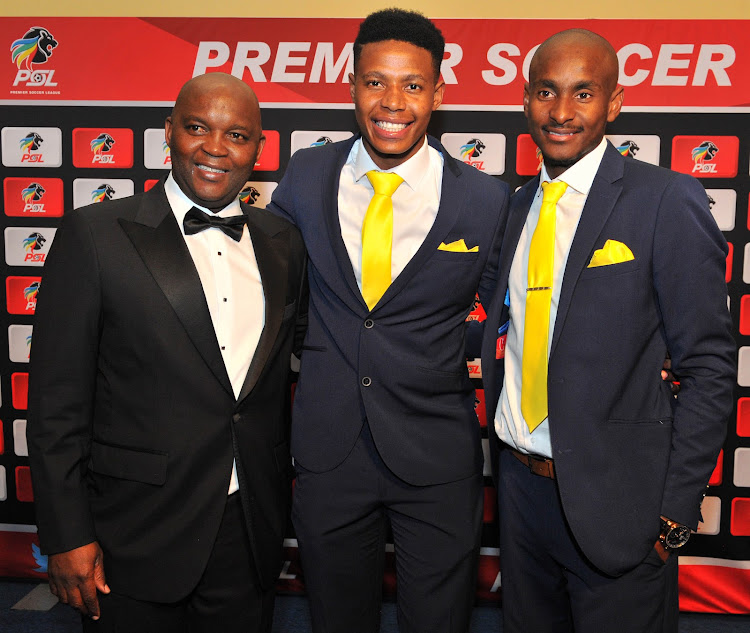 A file photo of Bongani Zungu (C) flanked by his head coach Pitso Mosimane (L) and then assistant coach Rulani Mokoen at the 2015/16 Premier Soccer League Awards ceremony in Johannesburg in May 2016 before the midfielder secured a move to Europe.
Image: Samuel Shivambu/BackpagePix

Mamelodi Sundowns coach Pitso Mosimane has surprisingly taken a soft and conciliatory stance in response to perceived disrespectful social media comments that were made by his former midfielder‚ Bongani Zungu‚ this week.

The French Lique1-based Amiens SC and Bafana Bafana midfielder also suggested it was the same situation while he was at Sundowns‚ where Zungu won the 2015-16 Absa Premiership title under head coach Mosimane‚ earning a transfer to Portugal’s Vitoria Guimaraes.

Zungu later apologized for the comments directed at Sredojevic. However he did not include what he had said regarding Mosimane in his apology.

Mosimane was asked to comment on the issue after Sundowns’ 3-1 win over Free State Stars on Wednesday night.

The Downs’ coach said he wanted to focus on the positives and to stay with the good memories he enjoyed with Zungu and Mokwena.

“He [Zungu] is my boy – I have good memories with him and I don’t want to spoil that‚” Mosimane said.

“If he did put those tweets‚ he made a mistake and maybe he was under pressure. We all make mistakes – do you know how many mistakes I have made?

Mosimane said that he believed someone else had written Zungu’s apology.

“In my opinion‚ I don’t think Bongani Zungu wrote that apology – he does not respond with that type of big English.

“They read the apology to me and the article commanded very good English. Even myself I don’t speak English that well.

“It was written in top English. I know my players man. You must read what’s not written and see what is not said.

Mosimane has been credited much of the responsibility for an improvement in Zungu’s game that saw the player move to and succeed in Europe.

“I prepared him to go and play in Europe. He was playing as a winger at Tuks [University of Pretoria FC] and I changed his position because he does not have speed to play that position in Europe‚” Mosimane said.

“I told Zungu that you are not too fast‚ you are not a No 10 and you don’t score enough goals.

“I went to Duduza on a Sunday looking for him in the whole township and I swapped him with Buhle Mkhwanazi to Tuks.

“That’s where I want to focus on – he is a multimillionaire in Euros now and his life and that of his family has changed for the better.”

Bongani Zungu has hastily apologised for comments he made on Twitter suggesting that assistant-coach Rulani Mokwena was the brains behind the current ...
Sport
3 years ago

Cape Town City coach Benni McCarthy has admonished Bongani Zungu for controversial comments made by the Bafana Bafana midfielder regarding Orlando ...
Sport
3 years ago
Next Article