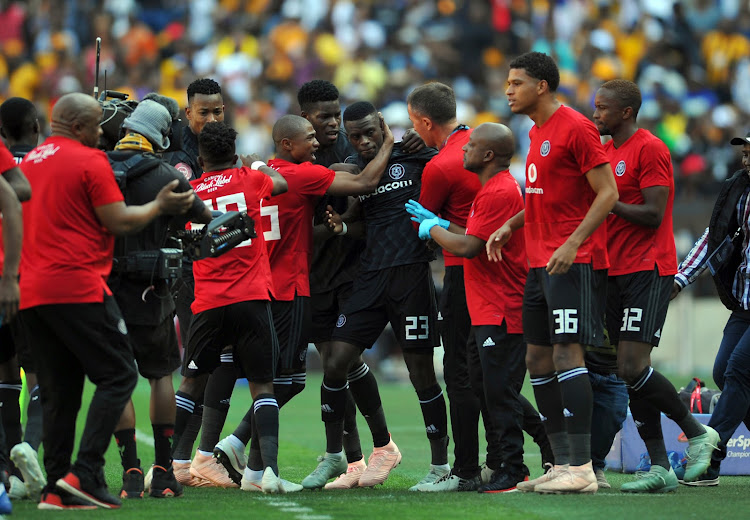 Innocent Maela of Orlando Piratescelebrates goal with teammates during the Absa Premiership match between Orlando Pirates and Kaizer Chiefs on the 27 October 2018 at FNB Stadium, Soweto.
Image: Sydney Mahlangu/BackpagePix

Orlando Pirates' class and superior structure gained over a season-and-a-third under their current impressive coaching staff prevailed over a Kaizer Chiefs who would have won the school priz for effort in Saturday's 2-1 Soweto derby win to Bucs.

Khama Billiat put a fired-up Chiefs ahead in the 15th-minute of the Absa Premiership matchup in front of more than 90 000 at a packed, heaving FNB Stadium. Pirates came back with a flame-thrower via Innocent Maela and Vincent Pule's 29th and 32nd-minute strikes.

Well, in the case of Solinas that life at Chiefs might be a little more short-lived. Actually the coach is under a little pressure again, as Saturday's defeat was his fourth game without a win in regulation time.

But the two coaches' attacking football made for an explosive first half of the derby, even if Pirates' super-clinical consolidation resulted in far less of a spectacle from the second.

For Chiefs, though, perhaps two forwards rushed back from injury a little in Leonardo Castro and Khama Billiat, who were both spent before the final 10 minutes.

And Solinas's attacking, while it may at times overwhelm lesser opposition, is far from finetuned enough to trouble a classily-arranged side like Sredojevic's Pirates over 90 minutes.

On Saturday, Chiefs threw everything into attack in the first 15 minutes. Pirates stormed back for the rest of the first half, then closed shop after the break.

Sredojevic opted for the more experienced Marshall Munetsi at centreback than new Brazilian Marcelo Da Silva from the XI that beat Chippa United 1-0 in the Telkom Knockout last Saturday. He brought Pule into his frontline, Musa Nyatama making way and Thembinkosi Lorch dropping to midfield.

Solinas made five changes from the near-B team who, as the coach rested players, beat Black Leopards on penalties at FNB on Sunday. Most notably, he brought Billiat back from injury and centre-forward Leonardo Castro proved to be in the country - contrary to the concerns of Pirates' assistant-coach Rulani Mokwena in the week - so started too.

For the first time in quite some time, a derby has been looked forward to enough to sell out.

And for the first time, due to a number of factors, not least some of Mokwena's fiery words this week, goals were expected. FNB did not have to wait long for that promise was fulfilled.

Chiefs' opener was scrambled over somewhat, but came from pressure piled on like a ton of bricks. The dangerous Amakhosi frontline, in which Castro and Billiat were early kingpins, created it.

Castro was played down the left but his squared pass was blocked. The rebound fell to Godfrey Walusimbi, whose cross found the head of Billiat, goalkeeper Siyabonga Mpontshane parrying back onto the Zimbabwean, who then got the touch over the line.

In the 25th Augustine Mulenga seemed to go down too easily under what seemed a legitimate challenge by Siyabonga Ngezana. Inexperience referee Eketsang Setloboko pointed to the spot.

Justin Shonga, though, struck too close, low to the left of Itumeleng Khune, who made the stop.

From the resultant corner, though, by Shonga, Maela expertly directed a header past Khune at his left upright.

Pirates' second, three minutes later came from a movement that was like a jaws of life machine working on a lawnmower. Shonga's nifty pass put Mulenga down the left, who squared for Pule to finish into an open goal - all executed like a lightning flash by Bucs' three-man frontline.

Amakhosi applied the early pressure of the second half, but Pirates had the best chance. Khune had to dive forward to parry a Mulenga cross, the ball falling to the Jekyll and Hyde Shonga, who lifted a shot over.

Castro faded quickly, and in the 74th he was replaced by Ryan Moon.

Pirates' second-half strategy had been essentially against the clock. When by the 78th Chiefs' other attacker pressed into the starting lineup, Billiat, left the field for Kabelo Mahlasela, the final 10 minutes seemed in Bucs' hands. They were.