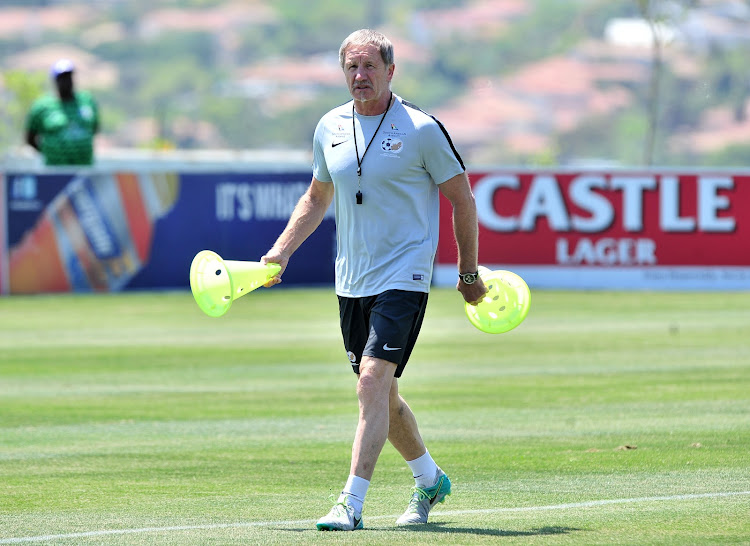 Bafana Bafana will play a warm-up match against Premier Soccer League team SuperSport United at Orlando Stadium on Wednesday as part of their preparations for Saturday’s 2019 Africa Cup of Nations qualifier against Seychelles.

South Africa coach Stuart Baxter has lined up his previous team as opposition and said he would – as he had in a friendly against AmaZulu in Durban ahead of last month’s 0-0 draw against Libya – ask SuperSport coach Kaitano Tembo to play to specific instructions.

The closed-doors training game will be played over two halves of an half-an-hour each.

“We did it last time and it worked very nicely. We asked one of the teams to throw a side together‚” Baxter said on Tuesday.

“AmaZulu did it before and SuperSport are going to do it for us tomorrow.

“They’re going to come out and play the way I want them to play for an hour. And we will change our things around a bit‚ and work a bit on the tactical things.

“It’s not one of these where you want to be standing depressed if you concede a corner. But I want to see a few of the tactical things‚ and SuperSport have been good enough to pitch up for us.”

The friendly will allow Baxter to try a few combinations‚ as he rebuilds his team yet again from the game against Libya.

A potentially key player who withdrew injured from that squad – Strasbourg’s exciting striker Lebogang Mothiba‚ who scored a stunning brace on the weekend in a 2-2 away draw against Angers – is in Johannesburg.

Fellow France-based midfielder Lebogang Phiri – not called up against Libya because of injury – has also been drafted this time.

A third French-based player – Keagan Dolly‚ who starred with a forceful performance on the left wing against Libya – is now injured.

Plus Baxter has had to contend with the late injury withdrawals of Mamelodi Sundowns’ Thapelo Morena‚ who seemed set to start at right-back‚ and Orlando Pirates winger Vincent Pule‚ who on current form for his club appeared set to play some role having started against Libya.