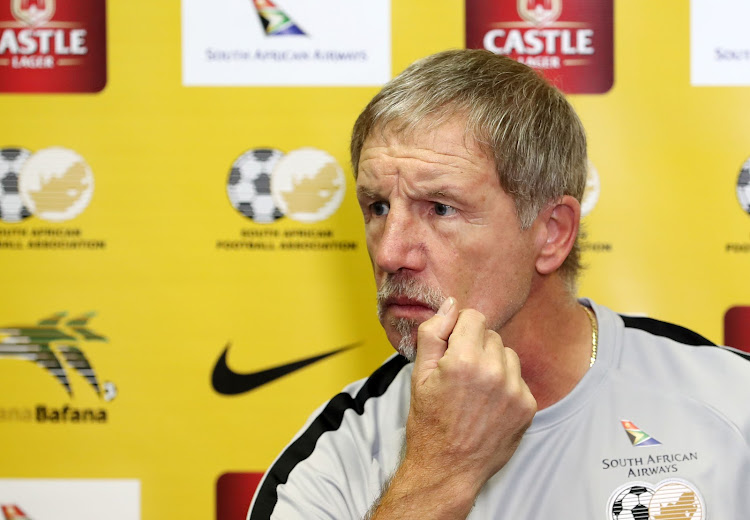 Bafana Bafana coach Stuart Baxter speaks to the media during his announcement of the SA squad to take on Seychelles in crucial back-to-back qualifying matches for the 2019 African Cup of Nations at Southern Sun Hotel in Sandton on Monday October 8, 2018.
Image: Muzi Ntombela/BackpagePix

Bafana Bafana coach Stuart Baxter has confirmed that Dino Ndlovu‚ Lebo Phiri and Percy Tau are the last outstanding members of his squad yet to report for duty ahead of the crucial back-to-back 2019 Africa Cup of Nations qualifiers against Seychelles.

Baxter said strikers Tau and Phiri boarded the same flight in Europe and they are both expected to touch down in Johannesburg later on Monday.

“We are waiting for Dino Ndlovu.

"His flight was a little longer than anybody else‚” said Baxter on Monday.

Bafana meet Seychelles at the FNB Stadium on Saturday in the first match and then head to the 189th ranked Indian Ocean islanders on Sunday for the return fixture to be played on Tuesday.

Baxter also disclosed that late fitness scans will determine whether Mamelodi Sundowns right back Thapelo Morena and Orlando Pirates winger Vincent Pule‚ who came to the camp with niggling injuries‚ will remain with the team or not.

“There are injury concerns with Vincent Pule and Thapelo Morena.

"I arrived at the Sundowns game against Wits on Sunday and found out that Morena had just pulled a hamstring in the warm-up‚” said Baxter.

“We will get them scanned and armed with the result of that we gonna make a call on whether we need to call replacements into the squad or we can manage them and get them fit for the first or the second match.”

Bafana are placed second behind Libya with four points on goal difference in Group E‚ with Nigeria third with three points and Seychelles at the bottom with zero points.

Thapelo Morena injured a quad muscle in the warm-up ahead of Mamelodi Sundowns’ Absa Premiership league match against Bidvest Wits on Sunday and is ...
Sport
3 years ago

Age on the side of striker.
Sport
3 years ago
Next Article