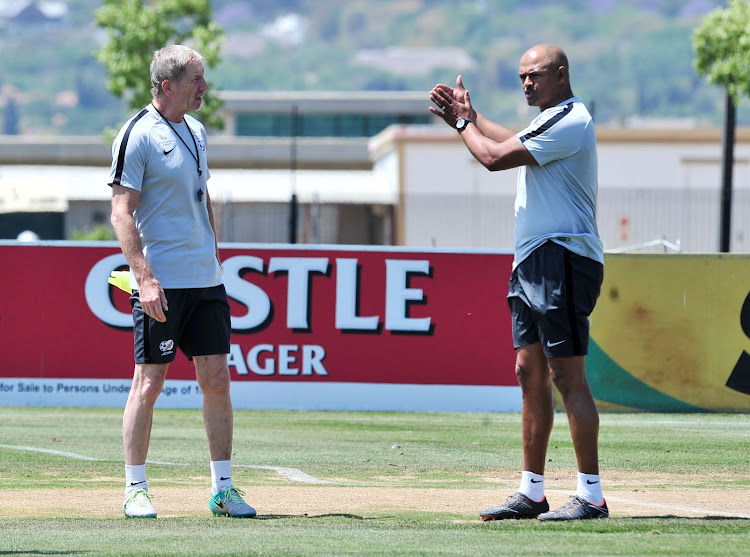 Bafana Bafana coach Stuart Baxter (L) has roped in former striker Shaun Bartlett (R) to his technical team for the home and away 2019 Africa Cup of Nation qualifying matches against Seychelles. The pair were pictured during the SA training session on Tuesday October 9, 2018 at Steyn City School in Johannesburg.
Image: Samuel Shivambu/BackpagePix

Lorch had arrived and trained with Bafana on Tuesday at Steyn City School in Fourways‚ ahead of the 2019 Africa Cup of Nations (Afcon) qualifier at FNB Stadium on Saturday.

Mkhize was only due to arrive later‚ and expected to be part of the afternoon training session.

Baxter had said in his opening press conference on Monday that Pirates winger Pule and Mamelodi Sundowns right-back Morena (quad muscle) were to undergo scans to evaluate their fitness.

Evidently both had to be withdrawn from the squad.

Bafana have four points in Group E in qualifying for Cameroon 2019.

If they beat Seychelles at FNB‚ then away in Victoria next week Tuesday (October 16)‚ South Africa will be in the driving seat to qualify ahead of their final two games away against Libya and at home against Nigeria.