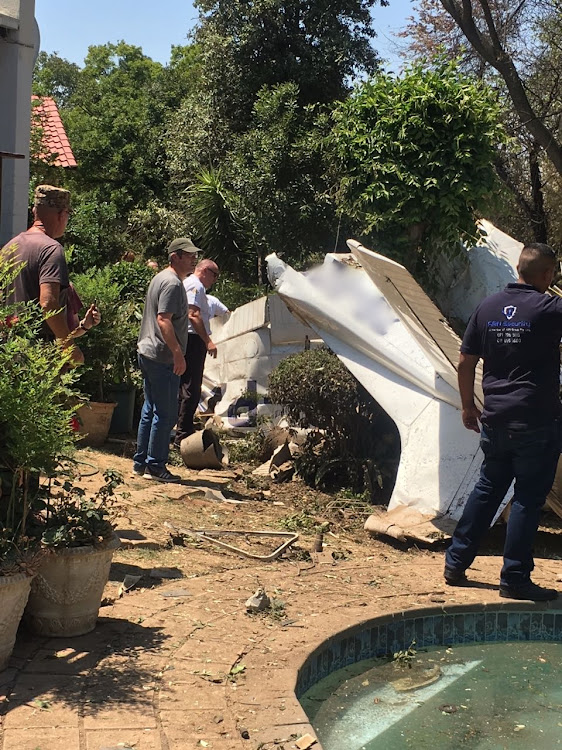 A plane crashed into a home in Midrand.
Image: emer-g-med

A female pilot and a gardener are dead after a light plane crashed into a residence in Vorna Valley‚ Midrand‚ on Monday.

Police spokesman Captain Kay Makhubele said the incident happened at around 11.30am.

"Both people were declared dead on scene‚" he said.

The plane had not hit the house but had crashed into the yard.

An eyewitness who is a neighbour told the publication that she had rushed to the scene shortly after the crash where she tried to make conversation with the injured gardener in a bid to reassure him that help was on its way.

"He was lying on his side. It looked like his face had been partially cut by the plane‚" said Lebo Magolego.

"The blood on his face was just so thick‚" she said‚ adding that he was traumatised by the ordeal.

She enquired about his name and called out to him.

The gardener was said to have been a foreign national.

"I asked him to move his fingers but he was hardly moving but I kept asking him to show me if he can hear me‚" she said.

Magolego said when she looked around the scene she saw a woman slouched inside the plane’s cockpit.

"She had braids on her head and was lying on her side‚" Magolego said.

Dramatic footage filmed by a passenger shows how flames spewed from the engine of a vintage aircraft, which shook violently moments before crashing ...
News
3 years ago

The female pilot had been travelling alone.

Malogelo said she had been in bed when she heard what sounded like a plane right above her roof.

"It sounded like the engine was troubled‚" she said‚ adding that moments after this‚ she heard a huge thud.

Malogelo said that the plane had rested on the bark of a tree and it had partially hit another neighbour’s wall.

Police had cordoned off the area leading to the house as aviation authorities and medics continued to comb the crash site.

A fire engine was positioned outside the house as scores of neighbour's stood near the tape‚ peering into the yard.

Makhubele said the bodies of the two deceased were yet to be removed from the scene.