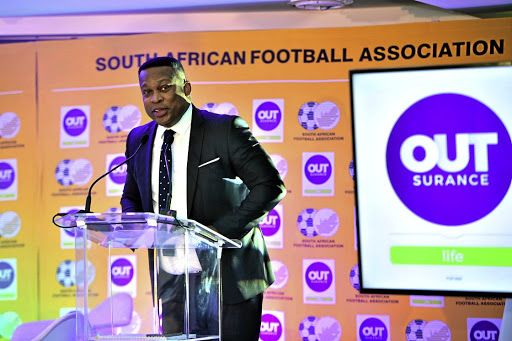 Robert Marawa at an event where Safa unveiled OutSurance as their sponsor.
Image: Samuel Shivambu/BackpagePix

This comes after Marawa allegedly gave a 36-minute interview to insurance company OutSurance on his sports show on September 11.

Earlier that day, Marawa was MC at an event where the SA Football Association unveiled OutSurance as their new referees sponsor.

As a result, the Metro FM and Radio 2000 simulcast host was allegedly slapped with a R240 000 invoice by the SABC's sales department following his allegedly unauthorised interview with the insurance company.

The interview, according to senior staff members at the SABC, was deemed to be advertising allegedly because Marawa allowed the OutSurance brand and social engagement representative Hazel Chimandhamba to speak about the company's products and its other partnerships, without first obtaining the necessary permission to do so.

Sunday World understands that Radio 2000 programmes manager Christopher Choane sought the advice of SABC sales department in order to determine if the interview was more advertising than editorial content.

SABC spokesperson Neo Momodu said: "The SABC affirms that it respects the confidentiality of contracts entered into with its service providers, employees and independent contractors. We will therefore not discuss matters of any nature related to our stakeholders publicly."

Marawa could not be reached for comment at the time of going to print. He also did not respond to text messages sent to him.

Several sources who are senior staffers at the SABC and privy to the matter revealed that Marawa has not yet responded to the invoice sent to him by the SABC.

The sources alleged that the SABC management was not entirely unhappy with the whole interview but felt that the segment where Marawa allowed the insurer's representative to speak about their products including their funeral cover and investment policies instead of limiting the interview to the Safa sponsorship constituted advertising.

"It was just too much airtime for OutSurance and a lost opportunity for the SABC to make money," said one official.

Another source, who works with Marawa at Radio 2000, said the timing of the interview and its length were an issue, especially since it was on the same day as the press launch, for which Marawa was also MC.

"That already screams conflict of interest and it could have been avoided if he had informed the SABC about the interview. But he didn't tell anyone," said the colleague.

The same colleague also claimed that one of the things that got Marawa into trouble was that he allegedly sent his script to the programming team led by Choane, 30 minutes before the show instead of sending it two to three hours before the show as is the norm.

Presenter has served national broadcaster with an ultimatum after his sacking.
News
2 years ago

Another source attached to SABC Sports finance said senior managers had approached their department to discuss the matter.

"The view from his bosses is that he should let them know once he has submitted his invoices for the work he has done for the SABC. He has not submitted any invoices since he came back in August. I suspect they might want to dock his earnings if he does not pay the money," said the official.

A senior SABC staffer sympathetic to Marawa also confirmed the drama over the interview but said the SABC will find it hard to justify the invoice sent to him as he was merely doing his job. "All he did was ask questions about the sponsorship and it can't be his fault that the insurer's representative took advantage of the platform and spoke about their products as well as other initiatives that they were working on," said the official.

After listening to the Podcast of the show, Sunday World noted that the name of OutSurance was mentioned at least 23 times. At least three callers were allowed to ask questions which were not related to the interview or the soccer sponsorship but about the company's policies.