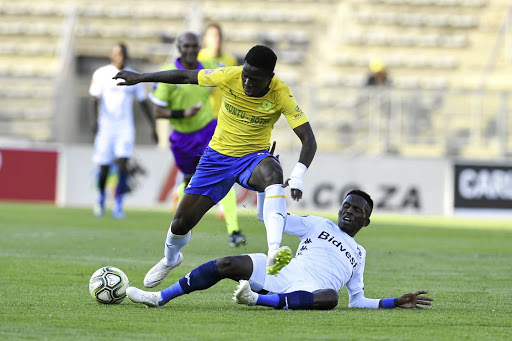 The two most decorated coaches in SA, Pitso Mosimane and Gavin Hunt, could not outdo each other as Mamelodi Sundowns were held to a 1-1 draw at home by Bidvest Wits yesterday.

Downs skipper Hlompho Kekana grabbed the Sundowns goal in the 56th minute while Keegan Ritchie equalised in the 67th minute.

Having initially been on the starting team, Thapelo Morena was withdrawn through a hamstring injury he picked up during warm-up. It would be a huge blow for him after receiving his first Bafana Bafana call-up recently ahead of their clash with the Seychelles this weekend.

But the biggest talking point of the match was another controversial refereeing decision, which saw Wits keeper Darren Keet handle outside his box without being penalised. It was the second successive game that the Brazilians had suffered a ref's mishap after their goal against Celtic was wrongly flagged for offside.

Sundowns, in the opening 45 minutes, did not penetrate the Wits box with Toni Silva leading the attack. In midfield, Lebohang Maboe and Tiyani Mabunda lacked fluidity.

Silva capped off his unimpressive performance by missing a one-on-one chance against goalkeeper Keet in the 43rd minute. He was replaced by Phakamani Mahlambi.

The Brazilians took the lead in the 56th minute after Gaston Sirino made a piercing run into the box and laid the ball off to Kekana to slot home.

Golden Arrows ended their winless streak by beating Black Leopards 1-0 through a goal from Knox Mutizwa.

In Polokwane, SuperSport United were held 0-0 by struggling Baroka.