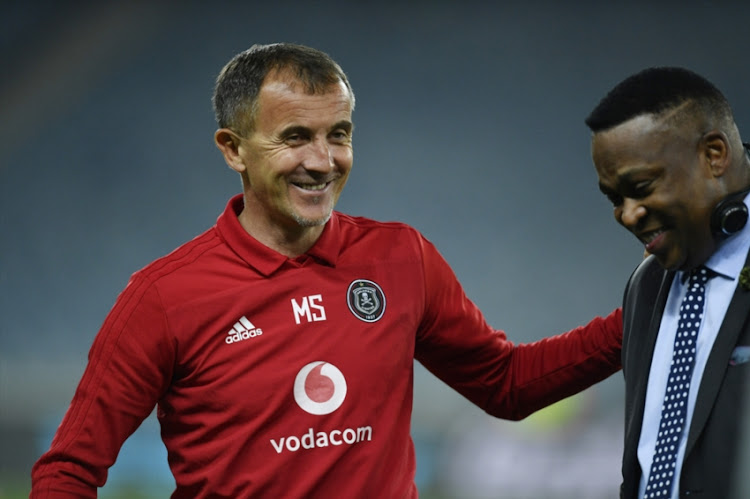 Orlando Pirates did not just produce the document‚ they also had it signed and stamped‚ Bucs coach Milutin Sredojevic said of his side putting up not just a performance‚ but the goals and the result too in their 3-1 Absa Premiership win against SuperSport United.

Pirates‚ tipped as among the PSL's most dangerous lineups this season‚ finally earned their first home win of 2018-19 at Orlando Stadium on Saturday night.

The Buccaneers‚ who have created chances but not had the killer instinct to finish teams this season‚ almost let the game slip when they allowed Bongani Khumalo to equalise in the 70th minute after Vincent Pule put Pirates ahead in the 15th.

But late strikes from substitute Thembinkosi Lorch (82nd) and Ben Motshwari (86th) saw Pirates eventually swamp a SuperSport who had not lost against Bucs in more than three years‚ since a 4-1 league win at Orlando in April 2015.

Pirates ended a nine-match winless streak against Matsatsantsa that included two Nedbank Cup final defeats (3-2 and 4-1)‚ and a 6-1 hammering that took the bottom out of Bucs' 2016-17 season.

The Buccaneers also managed a second win in succession following their 2-1 away win against Black Leopards before the Fifa international break.

"The document is not valid unless it has a stamp and signature‚" Sredojevic proclaimed after the game.

"In other words‚ in all six matches this season we have played very well. We had the document. However the signature and stamp was not there.

"The good is that this is our first win here at Orlando Stadium.

"The good is that on the wings from the confidence of this win tonight we can correct what is wrong and keep up what was good going into the next set of matches that we have starting with Cape Town City on Wednesday."

Sredojevic explained that his conservative change had been for the purpose of switching from three centrebacks in defence who were becoming stretched by SuperSport's dangerous front three‚ to a back four.

"We had a problem because Evans Rusike was stretching Ntsikelelo Nyauza on the right‚ Fagrie Lakay was stretching Innocent Maela on the left‚ and they were left with a one-on-one with Bradley Grobler‚ who is very good in holding the ball‚ against Happy Jele in the middle‚" Sredojevic said.

"So we were looking to be not that much stretched. And this was a time of the game where we had been in a downslide of our performance.

"However‚ we conceded that goal. And for that situation we went with two attacking players [Justin Shonga and scorer Lorch were introduced].

"We showed character‚ we were never nervous. With the football we were playing we knew that something would come our way."