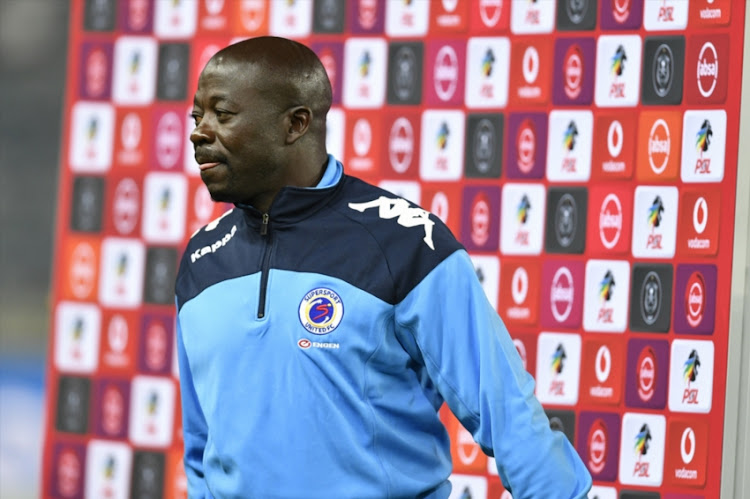 SuperSport United coach Kaitano Tembo has questioned his charges' ability to eke out results under intense pressure and away from home after they were brought down to earth by a scintillating Orlando Pirates at the weekend.

“I feel we didn’t really have a good start and we allowed our opponents to dominate us‚” admitted Tembo after a second league defeat in five matches.

“Pirates controlled the second ball and were a little bit more adventures than us going forward.

"But I think towards the end of the first half we gained a little bit of momentum and pilled on some pressure.

“Overall though‚ I think Pirates played well and were the better team than us.

"We tried to get back into the game and I was happy with the second half performance‚ even though they killed us with a third goal after they applied transition well.”

Goals from Vincent Pule‚ Ben Motswari and substitute Thembinkosi Lorch gave Pirates a deserved victory against a side that had dominated them both in league and cup matches in recent times.

Defender Bongani Khumalo managed to find the back of the net for the visitors in the second half but it was not enough to keep a rampant Pirates at bay.

United’s skipper Dean Furman echoed Tembo and conceded that Pirates were always first on the ball and caught them with their speed going forward.

“We came in the second half with a far better performance and got an equaliser (from Khumalo) and tried to get a second‚" said Furman.

"The third goal really killed the game for us.

"But the reality is that we didn’t start well.”

Tembo felt they did bend a few of their defensive principles when they were defending against a Pirates team that attacked them like tsunami‚ especially when Pule and Augustine Mulenga had possession.

“We pride ourselves in terms of defending‚" said Tembo.

"But I think that’s one area I was not happy with.

"I thought we could have defended better against some of their attacks that resulted in goals.

“But credit to Pirates as well.

"I think they showed a fighting spirit and were playing at home and deserve their three points.”

United will not have time to lick their wounds as they have a daunting league fixture against Black Leopards at the Lucas Moripe Stadium on Sunday.

Tembo will play that fixture with one eye on the MTN final on September 29.

United meet Cape Town City at the Moses Mabhida Stadium in a repeat of last year’s decider‚ a match that the Pretoria side won on penalties at the same venue.