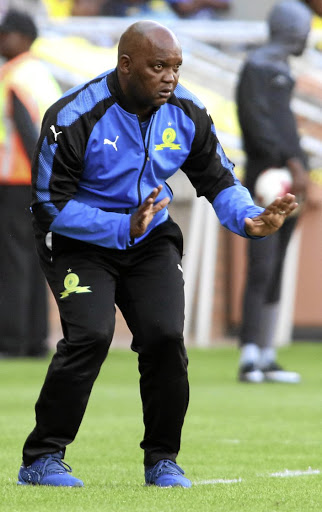 The next eight days will be testing for Mamelodi Sundowns, but head coach Pitso Mosimane expects his team to come out on top.

Following their 1-0 loss to Wydad Casablanca in the CAF Champions League on Friday, the Brazilians must beat Guinean side Horoya on August 28 to finish as runners-ups from Group C and join Wydad in the quarterfinals.

Despite the defeat in North Africa, "Jingles" remains optimistic and believes his team are playing well.

"I'm happy with my team, but not happy with the results," Mosimane said after the clash against Wydad.

Mosimane, however, admitted that it's their own doing that they are now third in the group and faced with a must-win match.

"We were 2-1 up at Horoya and we conceded a goal in the last four minutes (to draw 2-2) and the game in Togo (against AS Togo-Port) I don't want to talk about it. It's sickening. In that game we should have scored five goals, but we lost the match (1-0)," he said.

Sundowns have a couple of domestic matches before playing Horoya.

They take on Highlands Park at Loftus Stadium on Wednesday (7.30pm) looking to ensure they stay in the top half as they seek to retain the title they won last season.

Sundowns will then travel to the Western Cape for their MTN8 semifinals first leg against Cape Town City at Cape Town Stadium on Sunday (3pm).

Sundowns are no weaker in the Champions League‚ says Mosimane

Mamelodi Sundowns are not noticeably weaker than in previous years in the Caf Champions League‚ they have just not been as clinical on the small ...
Sport
3 years ago
Next Article