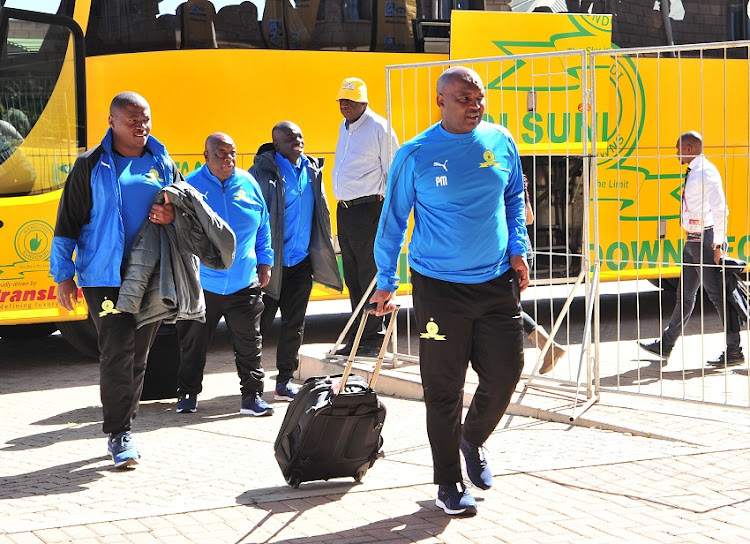 Nascimento missed the 2-0 MTN8 win over Golden Arrows at Lucas Moripe Stadium on Saturday with a  hamstring injury and Mosimane is crossing his fingers that travelling to North Africa won’t  affect his recovery programme.

“I am hoping that Ricardo is back on Friday because he is a brave and intelligent player‚” he said after the Arrows win.

“In Morocco it is going to be a sea of red on the stands and I need players with a strong personality and will be able to grind for a result under those conditions.

"We have to get there and be composed‚ be clever and keep on probing.

"If we don’t get a win at least get a point but we must never park the bus‚” he said‚ confirming that they fly out of the country on Monday via Ghana and arrive in Morocco on Tuesday.

“It is going to be seven hours to Ghana‚ five in transit and we leave in the morning  to Casablanca.

"The challenge is coming back because we have Highlands Park two days after our return.

"Those who are staying behind must do the job for us against Highlands.

"Wydad are highly experienced‚ they know how to manage the game. For us we have to be careful on penalties because they are good on set pieces and how to delay play."

In their last two matches against Polokwane City and Arrows‚ Sundows have kept two clean sheets and Mosimane said he wants his defence to achieve the same in Morocco.

“It is good that we are yet to concede in two matches and we need another clean sheet in Casablanca‚" he said.

"It is not going to be easy but hopefully we can do it and enhance our chances of progressing to the next round.”

Looking back at the 2-0 win over Arrows after goals from Sibusiso Vilakazi and Wayne Arendse‚ Mosimane said he would like to win this tournament for the club as it is the only domestic trophy he has not won since he arrived at Chloorkop.

“Whether I am desperate to win this tournament‚ I am not sure but eager to win it yes‚" he said.

"I would like to win this trophy with Sundowns because I have not won it with the club. But this competition is always with the Champions League quarter-final in between.”