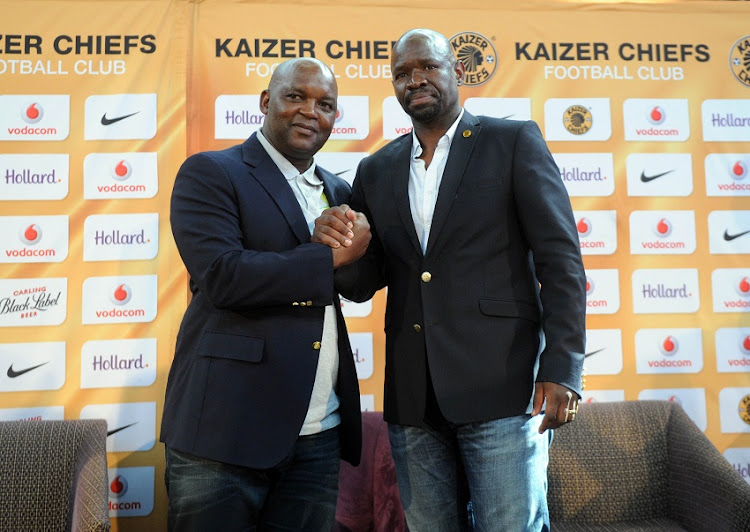 Mamelodi Sundowns coach Pitso Mosimane has urged SuperSport United to give Kaitano Tembo a chance to prove himself.

United finally appointed Tembo as permanent coach last week after he stood in on a caretaker basis when Eric Tinkler was fired in March following a string of unsatisfactory results.

Under Tembo’s guidance‚ United qualified for the MTN8 and they start the defence of their title with a mouth-watering clash against rejuvenated Orlando Pirates at Orlando Stadium on Saturday night.

“They must give him a chance like they did with Stuart Baxter and them‚” said Mosimane who won the SAA Supa8 and the Absa Cup with United in 2004 and 2005 respectively.

“I remember we beat them with Baxter in charge and they never removed him‚ so Kaitano must be given a chance like they also did with Cavin Johnson and Gordon Igesund.

“He must hang in there‚ they did not play badly against Cape Town City. He’s got his tactics right‚ his team balance is proper but they were not biting enough to win the match. Also‚ the first game is not an easy one in Cape Town because City is a difficult club.”

Mosimane‚ who got his coaching break at SuperSport in 2001 and stayed with the club until 2006‚ said black coaches in SA are often not fully supported and trusted by their clubs and that can make their working conditions difficult.

“I think for black coaches‚ sometimes the guillotine is always is too close to your neck. One loss and one draw there and there is no confidence in the guy‚ but the others they leave them‚” Sundowns’ coach said.

“I just fight for our local coaches because anyone who comes from anywhere in the world they give them 10 to 12 games. You know the story of Chippa United with Dan ‘Dans’ Malesela.

“I am talking on behalf of our coaches. It is tough for local coaches to be trusted and that’s why it is good to see Gavin Hunt and Steve Komphela doing well so early in the season.”

Mosimane added that Komphela‚ who went three seasons without a trophy at Kazier Chiefs‚ did well for Amakhosi last season as the team ended third.

“I have always been vocal about Steve because he didn’t do that bad at Chiefs. I think that he was sacrificed early and I hope he does well at Bloemfontein Celtic for people to realise that he is not that bad‚” Mosimane said.

“I am happy for Aliou Cissé who took Senegal to the World Cup and won a game. He was the only guy who gave us hope.

“Even on the continent they [African clubs and national football associations] don’t care who does well in the Caf Champions League‚ they get on the flight to France‚ Croatia and Serbia.”