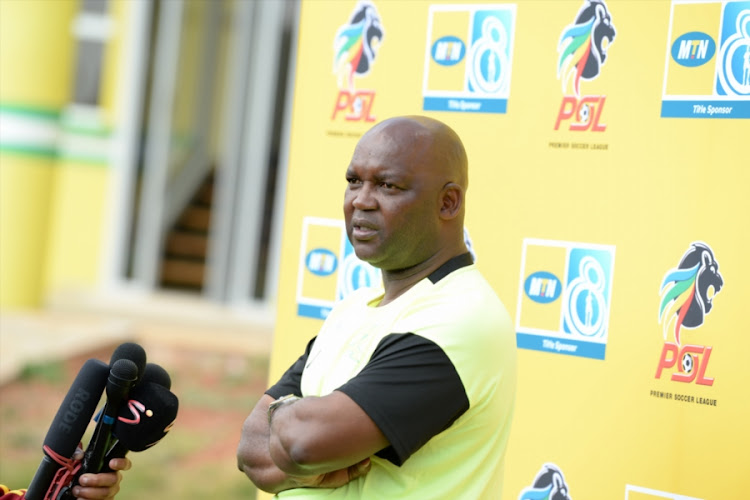 Mamelodi Sundowns head coach Pitso Mosimane speaks to reporters during a media day at the club's training base at Chloorkop on August 08, 2018 in Pretoria, South Africa.
Image: Lefty Shivambu/Gallo Images

Outspoken Mamelodi Sundowns coach Pitso Mosimane has said that the financial rewards of winning the Absa Premiership and MTN8 do not make sense.

The prize money for winning the league‚ where clubs have to negotiate through 30 matches over 10 months‚ is R10m. But it takes only four matches to pocket R8m in less than three months of the MTN8.

“I don’t want to sound like a guy who always causes problems but I am right and you know that I am right. Why should you play 30 games to get R10m and four to get R8? for me it doesn’t make sense financially‚” the forthright coach said as he prepared to host Golden Arrows in the first quarterfinal at Lucas Moripe on Saturday afternoon.

“Maybe winning the league will go up to R30m or something like that one of these days because it has been sitting on R10m for far too long.”

Mosimane said some clubs may take the conservative approach of going all out to try and win the MTN8 and be on survival mode in the league‚ but that is not the same with Sundowns “because we must qualify for the Caf Champions League every season”.

He said: “Some clubs may think that the best way is maybe to win the top eight competition and not worry too much about playing 30 games to win the league. For us it is the opposite because we want to play Champions League and for that we must win the league.

“Winning the league is also about prestige because you want to say that I finished top of everyone after 30 games in different conditions and home and away. I think that’s what makes the league credible.”

During his highly successful five-and-a-half seasons at Chloorkop‚ Mosimane has won all major domestic and continental cup competitions except the MTN8‚ but he said is not under any pressure to lay his hands on the trophy.

“I would say winning the MTN8 is about bragging rights for the fans or a box one would like to tick‚” he said.

“But is it is crucial? No. Winning the competition is something that makes statistics but really not that important. But at the same time‚ I want to win because who doesn’t want to win it.”

Looking ahead to the Arrows match‚ Mosimane admitted that the Durbanites are a tricky bunch.

“They are always tricky opponents‚ they always give us a hard time in cups and they have a way of eliminating us‚” he said.

“Their tactics always change when they play us. They have experienced players who have played together for the past few years and we need to manage them.”

Kaizer Chiefs have analysed their mistakes made in their 3-1 league defeat against Bidvest Wits and will aim for a far more positive approach when ...
Sport
3 years ago

Phakamani Mahlambi is training alone at Egyptian Premier League giants Al Ahly after handing in a transfer request at the club.
Sport
3 years ago
Next Article