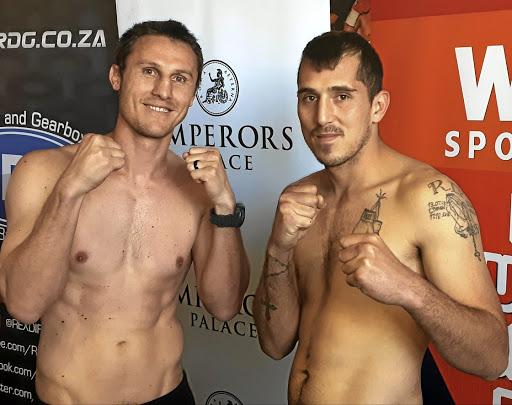 Friends Ryno Liebenberg and Alfonso Tissen have promised to beat each other to pulps for the vacant ABU title at Emperors Palace on September 1.
Image: Nick Lourens

The long-held argument that styles make fights will be tested at Emperors Palace on September 1 when Alfonso "Terror" Tissen and Ryno "The Lion" Liebenberg clash for the vacant ABU super middleweight belt in Golden Gloves Call to Glory bill.

The ABU lists Tissen at No 5 while Liebenberg is rated No 3. What makes their upcoming fight even more tantalising is that they are friends who have sparred well over 1000 rounds against each other.

Tissen, at 26, has age on his side, while Liebenberg is on the wrong side of boxing age at 34.

Tissen is like a matador. He moves from side to side while setting up his victims for destruction. His superb conditioning, thanks to trainer Gert Strydom, has always enabled him to fish smart even when the going gets tough.

Tamrin means serious business in the corner.
Sport
3 years ago

This will be Liebenberg's second match in the super middleweight division where he was controversially stopped in six rounds by Vincent Feigenbutz in the Global Boxing Union and IBF Inter-Continental titles in Germany in February. That was Liebenberg's second stoppage loss in six defeats, 18 wins (12 knock outs ).

Defeat for Liebenberg will signal the end of the road, while a loss for Tissen will give clear indication as to where he is headed to. Lusanda Komanisi will make his debut in the lightweight class against Michael Mokoena in a non-title fight. Komanisi last fought in September last year.

He was knocked out in the second round by Jhack Tepora of the Philippines for the vacant IBO Inter-Continental featherweight title.