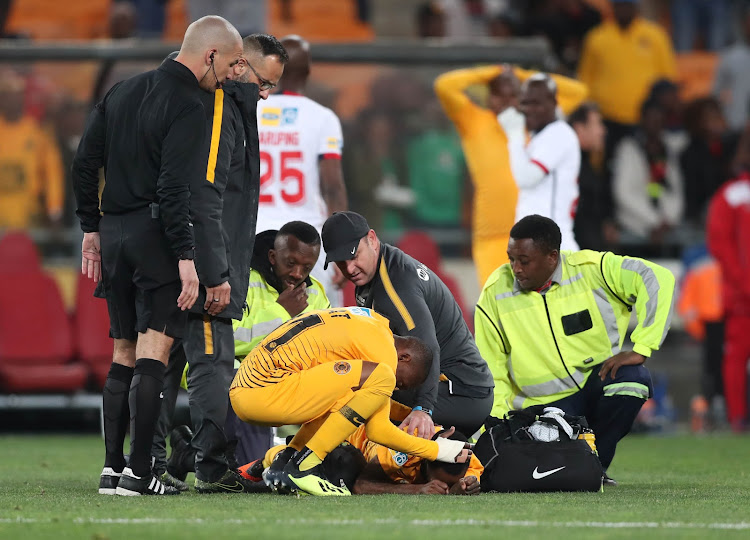 Joseph Molangoane was left devastated after he went off with a broken leg in Kaizer Chiefs' 3-0 MTN8 quarterfinal win against Free State Stars at FNB Stadium on Saturday night.

Chiefs' little winger had been influential in a resurgent performance by Amakhosi as they produced far better movement in their frontline than in a 3-1 midweek league defeat to Bidvest Wits at the same venue.

In the 50th minute Molangoane went in for a sliding challenge on Makhehleni Makhaula as Stars' left-back was playing a clearance and the sickening clash saw the Chiefs player stretchered off.

Afterwards Amakhosi coach Giovanni Solinas confirmed Molangoane's broken leg, and said this was a huge blow to his team.

"We are very happy for this victory but we are also shocked because we lost a nice guy like Joseph," Solinas said.

"We dedicate this victory to Joseph. It's a serious injury. I hope this player can come back quickly.

"My players are shocked in the dressing room. Some are very sad.

"'Rama' [Ramahlwe Mphahlele] spoke to him [Molangoane] now. He is shocked. They lost a team-mate, we lost an important player."

Amakhosi midfielder Siphelele Ntshangase went off injured later, but Solinas said this was a knock.

Some clever tweaks, and importantly an injection of youth, saw Kaizer Chiefs improve markedly from a midweek setback as new coach Giovanni Solinas ...
Sport
2 years ago

Sundowns cruise to MTN8 semis with win over Arrows

On occasions they got their passing game to a tee, Mamelodi Sundowns were pleasing on the eye.
Sport
2 years ago
Next Article