Sundowns striker wait on Swedish side Djurdardens verdict after trial 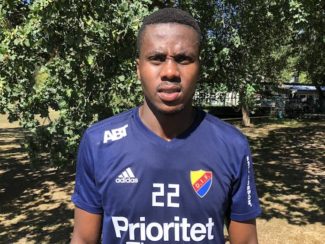 Mamelodi Sundowns striker Bonginkosi Ntuli pictured in the colours of Swedish side Djurdardens, where he is on trial hoping to win a contract, on August 7 2018.
Image: DjurdardensIF.se

Bonginkosi Ntuli is still waiting to hear if he has done enough to earn a loan move to top Swedish side Djurdardens‚ but is enjoying his 10-day trial in Europe.

The 27-year-old is seeking an exit away from Mamelodi Sundowns‚ where he has been deemed surplus to requirements by coach Pitso Mosimane.

Djurdardens have a strong history with South African players‚ including the Mayambela brothers Mark and Mihlali‚ as well as another ex-Sundowns star‚ Zimbabwean forward Nyasha Mushekwi.

“The first week was a little tough because I was not quite in shape when I arrived. But now I’ve improved and am back at my normal level‚” Ntuli told the Djurgardens website.

“The level is good here and it shows that the competition is tough. Players work hard every day in training and the matches have good pace.

“I’m getting to know the guys better and better‚ and am trying to adapt to the kind of football that the team plays.

"It gives me a new experience every day and a chance to learn more.”

Ntuli says he has not heard yet from Djurgardens sporting director Bosse Andersson about whether he will be signed for the remainder of 2018.

“We have not had any calls yet‚ but maybe we'll sit down and talk later in the week. Then we'll see what the situation is and what happens next.”

Andersson has previously spoken of the qualities of Ntuli and the possibility of bringing him on board.

“We have a good relationship with Mamelodi Sundowns.

"Bongi has properties that he can show almost immediately‚” Andersson said.

“Sundowns contacted me [about Ntuli] and we have had some success stories with them [South African players] before.

“There was interest from other clubs but I spoke with Pitso and the club management and we agreed that we would be able to borrow Bongi on favourable terms.

“He's fast‚ likes to be in the box and works hard to get better. It is clear that he sees this as a kick to have this opportunity and we have time left before the transfer window closes.

“We'll see if this might be an option for the short term in the fall‚ but there is an opportunity to discuss the future too.”

Ntuli joined Sundowns in 2014 but has spent every season since out on loan‚ first to AmaZulu and then Platinum Stars for the last three campaigns.

He has 38 goals in 115 starts in the South African Premier Soccer League.

SuperSport United registered their first win of the season with a hard fought 1-0 win over AmaZulu during their largely uninspiring Absa Premiership ...
Sport
3 years ago

Mamelodi Sundowns moved to second spot on the Absa Premiership standings with four points after a 2-0 win over Polokwane City at Peter Mokaba Stadium ...
Sport
3 years ago
Next Article