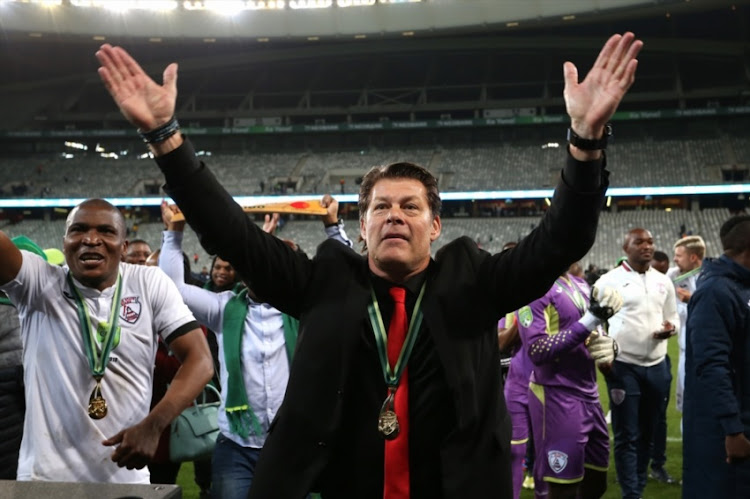 Free State Stars coach Luc Eymael has said that he will accept a repeat of last season as a success for his team’s 2018-19 campaign.

Stars finished sixth in the Absa Premiership last season after flirting with a top four position until the final weeks of 2017-18.

They won their first trophy since 1994 beating Maritzburg United 1-0 in the season-ending Nedbank Cup final in Cape Town in May.

Eymael said that with a club of such limited resources‚ a replica of last season would be an achievement for Stars‚ who meet Kaizer Chiefs in Saturday’s MTN8 quarterfinal at FNB Stadium (kickoff: 6pm).

“What I’ve said to my players is that to achieve something for a team like Free State Stars‚ and also in your life‚ is very difficult‚” the coach said.

“It takes a lot of work‚ a lot of commitment. But to replicate it is 10 times more difficult.

“If we bought some players now‚ it’s to bring some competition into the team.

“And I have said to my players from last season‚ ‘Guys‚ you have to start from zero‚ because now people will not look at you like they did at the beginning of last season‚ where we were coming from fighting relegation’. And then Stars started to win‚ but people said‚ ‘The bubble will burst very soon’.

“So‚ yes‚ to replicate it will be very tough. And I said to my management that if we can succeed to have the same season – also now playing in Africa [in the Caf Confederation Cup] – it will be fantastic.”

Stars began 2018-19 with a 3-0 away league defeat against Bidvest Wits‚ bouncing back with Wednesday night’s 2-1 home win against Maritzburg.

Among Ea Lla Koto’s signings have been forward William Twala from Maritzburg‚ Eleazar Rodgers from Wits and Judas Moseamedi from Cape Town City.