Sundowns cruise to MTN8 semis with win over Arrows 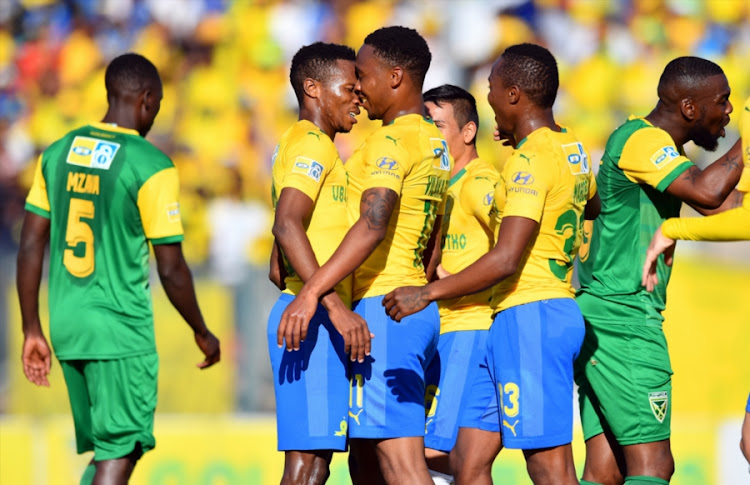 Mamelodi Sundowns forward Sibusiso Vilakazi celebrates with his teammates after scoring the opening goal in a 2-0 win over Lamontville Golden Arrows to advance to the semifals of the MTN8 at Lucas Moripe Stadium on Saturday August 11, 2018 in Pretoria, South Africa.
Image: Johan Rynners/Gallo Images

On occasions they got their passing game to a tee, Mamelodi Sundowns were pleasing on the eye.

Their coach Pitso Mosimane preaches total attacking football to his players and he must have been proud with the manner in which his troops defended, played the short passing game and pressed Lamontville Golden Arrows whenever they were not in possession of the ball.

They did not get it right all the time but on occasions they combined well, and the Brazilians proved too much for this modest Arrows side as they progressed to the semi-finals stage of this MTN8 competition which remains elusive for Mosimane at Chloorkop.

Last season, Sundowns were eliminated at this stage of the competition by Maritzburg United but this season they have a chance to go all the way with Mosimane having a chance of finally laying his hands on the winners medal.

Sundowns’ fluidity for most parts of this match which sparked sporadically exposed some of the tactical limitations of Arrows who employed a dangerous game plan of sitting back and trying to catch their opposition on the counter attack.

Sundowns first goal was an example of how they got their quick attacking movement spot on as the move involved Jeremy Brockie, Thapelo Morena, Themba Zwane before Sibusiso Vilakazi finished with a close range shot that beat Arrows goalkeeper Nkosingiphile Gumede.

Shortly before they opened the scoring, they were not successful with a similar attacking move that was orchestrated by man-of-the-match Gaston Sirino and Morena as Vilakazi ballooned his shot from inside the box over the cross-bar.

For their second goal, they went for a different dimension as Sirino went to the right flank from where he delivered a telling cross into the box and it was met with the head of defender Wayne Arendse who made no mistake.

Before the break, Arrows did have their chances on the attack with Knox Mutizwa and Lerato Lamola at the forefront of those attacks but they did not do enough to get the better of Sundowns goalkeeper Kennedy Mweene.

Mweene continued between the sticks for the home side after he replaced Denis Onyango who is recovering from concussion he suffered in their last league match against Polokwane City during the week.

As sign of depth in his squad, Mosimane made three changes to his starting line-up for the third match in succession with Arendse replacing injured Ricardo Nascimento and Sibusiso Vilakazi for Oupa Manyisa and captain Hlompho Kekana for Tiyani Mabunda in the midfield.

With this a place in the next round secured, the Brazilians shift their focus to the Caf Champions League and they depart for Morocco on Sunday to start preparations for the must win group stages clash against Wydad Athletic Club on Friday.

They only return to league action with a home tie against Highlands Park on August 22 where Mosimane will be looking to his second win of the season after they drew with Kaizer Chiefs and beat Polokwane City.

For Arrows, they have a few days of working on their deficiencies as they only return to action in the Absa Premiership when they travel to the Mother City to take on Cape Town City on Saturday where they will be hoping to return to winning ways.

Having went to the break trailing by one goal, Arrows came back with more intent in the second half as went in search of the equaliser but they could not find the break as Sundowns registered their second clean sheet in succession in all competitions.