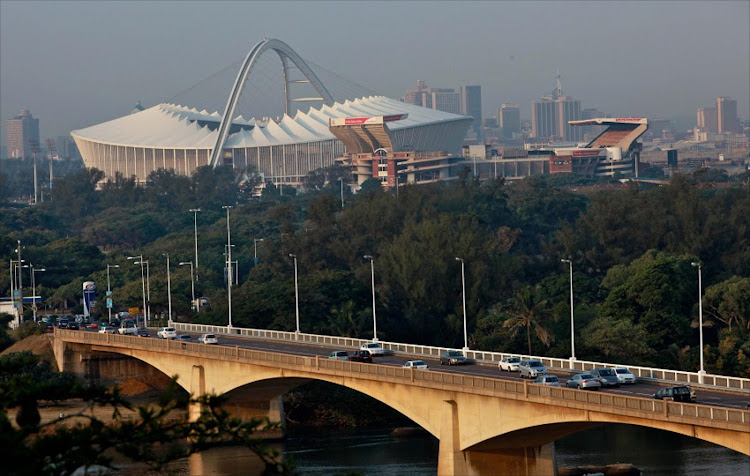 Outside view of the Moses Mabhida Stadium in Durban.
Image: Tebogo Letsie

Bafana Bafana are returning to Durban for their next African Nations Cup qualifier against Libya despite the Moses Mabhida Stadium having been the scene of some horrendous performances in recent times.

South Africa will host Libya there on Saturday‚ September 8 with a 3pm kick-off in their second qualifier in Group E‚ having begun the campaign for Cameroon 2019 with an away win in Nigeria last year.

With the top two teams in each group advancing‚ it is a match that South Africa cannot afford to botch up.

It was at Moses Mabhida Stadium last year that the national side lost 2-0 to the tiny Cape Verde Islands and effectively kissed goodbye to their chances of going to the 2018 World Cup in Russia.

The venue was also used twice in the 2017 Nations Cup qualifiers and saw an embarrassing goalless draw against the Gambia‚ another of African football’s lightweights‚ and a goalless draw with Cameroon. In both matches‚ numerous chances were squandered by the Bafana strikers in a show of ineptitude.

Durban has hosted half of the last 10 home qualifiers that South Africa have played in either the Nations Cup or World Cup preliminaries.

South Africa have played 11 home matches in their last three qualifying campaigns. Bafana played five home games in the 2018 World Cup qualifiers‚ which saw two in Polokwane‚ two in Durban and one at Soccer City in Johannesburg.

In the abortive 2017 Nations Cup qualifying campaign‚ Bafana played twice in Durban and once in Nelspruit.

In the 2015 campaign‚ where South Africa did qualify and knocked out Nigeria in the process‚ home games were played in Cape Town‚ Durban and Polokwane.

Next month’s match against Libya is the first of three home games in the 2019 Nations Cup qualifiers with the other two expected to be played in Gauteng.