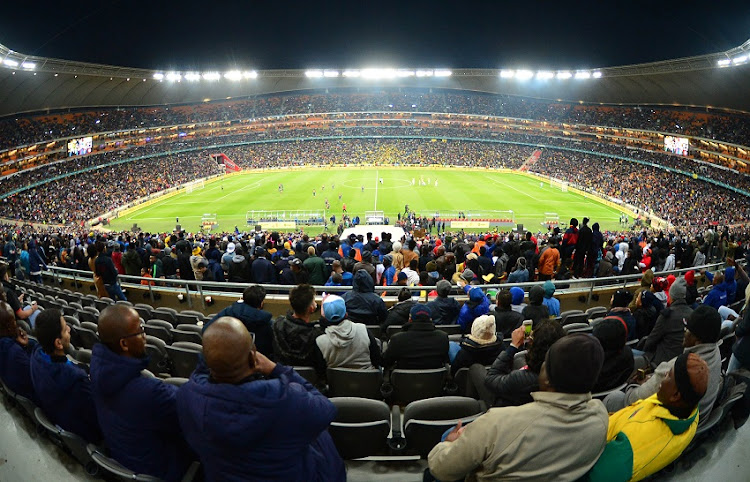 General view of the Stadium during the 2018 Mandela Centenary Cup Friendly match between Mamelodi Sundowns and Barcelona at FNB Stadium, Johannesburg on 16 May 2018.
Image: ©Samuel Shivambu/BackpagePix

The department of communications has announced that the SABC will resume broadcasting Premier Soccer League games on radio.

The announcement comes following an urgent meeting between Communications Minister Nomvula Mokonyane‚ Sports and Recreation Minister Tokozile Xasa and the SABC board about the matter.

A statement issued on Monday evening reveals that the politicians then later met with the Premier Soccer League where it was decided that the PSL would commence a process with the SABC to finalise all pertinent issues relating to agreements that govern relationship between the parties.

The SABC announced on Friday that it had been advised that it would not be allowed to broadcast league matches on radio following unsuccessful negotiations with the PSL.

“At this stage‚ the SABC will only broadcast PSL soccer matches on its television platform‚” the broadcaster said in a statement at the time.

Here is the full statement issued on Monday evening by the department of communications:

SABC TO RESUME WITH BROADCASTING OF PSL MATCHES WITH IMMEDIATE EFFECT Johannesburg‚ Monday‚ 06 August 2018 - The Minister of the Department of Communication (DOC)‚ Honorable‚ Nomvula Mokonyane and the Minister of Sport‚ Honourable Tokozile Xasa convened a meeting with the Board of Directors and Executive Management of the South African Broadcasting Corporation (SABC).

This meeting follows the urgent need to align on some outstanding issues on the existing contract between the SABC and Premier Soccer League (PSL).

The SABC briefed both the Ministers in order to provide an in depth understanding of the events that led to this unfortunate situation‚ the liquidity issues affecting the SABC and the acquisition of sport rights in general.

Both Ministers are concerned with the situation that the SABC finds itself in and have pledged to support the public broadcaster in delivering on its mandate around the delivery of sport content.

Both Ministers’ are treating this matter with the utmost importance as their primary concern is to ensure that the South African public is adequately served by the SABC.

To this end‚ the Ministers also held a meeting with the Premier Soccer League (PSL) represented by its Chairperson‚ Dr. Irvin Khoza‚ accompanied by member of the PSL Board‚ Mr Kaizer Motaung and the Chief Executive Officer‚ Ms. Mato Madlala.

The parties have agreed that the SABC and PSL will immediately commence a process to finalize all pertinent issues relating to the agreements that govern the relationship between the parties.

In the interim‚ there has been agreement that all soccer matches will be broadcast on the SABC radio platforms as per the fixtures list of the PSL.

Ministers’ Mokonyane‚ Xasa and the leadership of the SABC and PSL would like to sincerely apologise to all South African citizens who rely on SABC radio for live coverage of the PSL soccer games which were interrupted over the weekend.