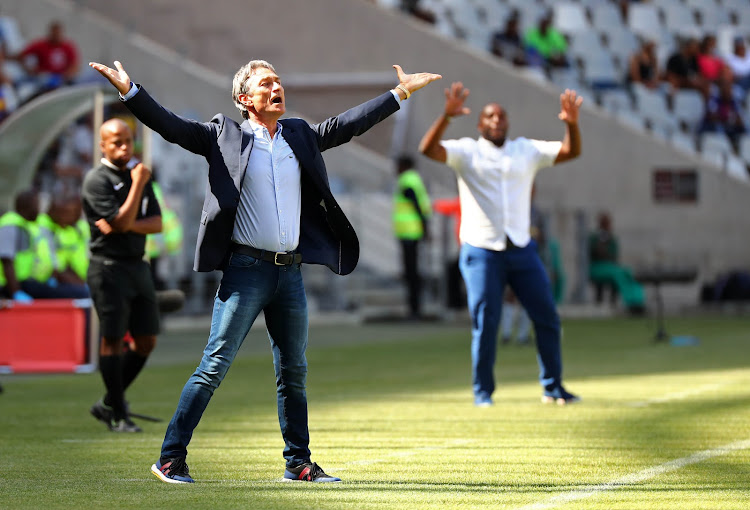 Cape Town City kept their title hopes alive as local boy Craig Martin scored the only goal of the game in a feisty 1-0 success over local rivals Ajax Cape Town at the Cape Town Stadium on Saturday.

The victory was a fourth in a row for City in the iKapa Derby, with Ajax, who had Gerald Takwara red-carded in the first half, yet to manage a goal as their relegation woes continued with a fourth defeat in five games.

Coach Benni McCarthy also earned bragging rights for his side in what is a fixture that not only divides a city, but a family too, with John Comitis able to chalk up another win in his feud with his brother-in-law, Ajax CEO Ari Efstathiou.

As expected there was some fire in the dug-out too between the coaches as McCarthy and Ajax's Muhsin Ertugral had to be restrained by their players when tempers flared in the second half. The former was eventually sent to the stands.

The match was delayed by 15 minutes after ticket chaos at the turnstiles, but when it did get under way it was a cagey start.

Excellent work from Ayanda Patosi and Martin set up Nigerian striker Victor Obinna for a headed chance at the back post, but he could only steer it wide of goal.

City dominated the possession in the early part of the game and were unfortunate not to lead when Taariq Fielies excellent ball behind the Ajax defence was perfect for Martin, who raced clear and clipped the ball past goalkeeper Brandon Petersen.

There was a hush around the ground as the ball trickled towards goal, but rebounded off the post and Ajax were able to clear.

Shortly afterwards, Ndiviwe Mdabuka headed over from close-range when he really should have hit the target.

Fielies took one for the team just before the half-hour mark when Tashreeq Morris threatened to race away down the right and was scythed down by the City defender, who received a deserved booking but potentially saved his side from conceding the opener.

Veteran Teko Modise found himself with time and space 35-yards from goal, but his dipping shot was just wide of goal, while the excellent Edmilson was a constant threat for City from left-back and almost picked out Obinna with another tantalising cross.

City should have led six minutes before the break when they again found the Ajax defence napping, but with time and just Petersen to beat, Thabo Nodada saw his shot saved.

Ajax were reduced to 10 men when Takwara received two yellow cards in two minutes, a pivotal moment in the game.

But it was the Urban Warriors who had a superb chance to take the lead before the break when a quick-counter set-up right wing-back Sirgio Kammies on the edge of the box but he flashed the ball wide from a central position.

City finally had the lead they deserved early in the second half when Martin bundled the ball home from a Patosi cross to the back post, his second goal of the season.

Substitute Lyle Lakay then put the ball on a plate for Nodada at the back post, but the diminutive midfielder headed wide of goal and Modise forced a good save from Petersen with a free-kick in the closing minutes.