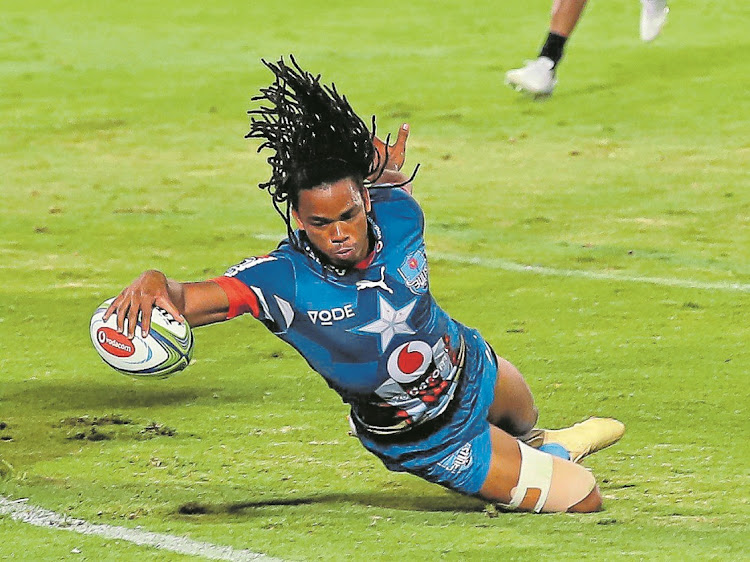 Bulls outside centre Stedman Gans is determined to have a successful career at Loftus.
Image: Gordon Arons

Stedman Gans has revealed that he inadvertently blurted something out in frustration during his debut match at the Bulls as the Pretoria side continued to make mistakes in the game.

The remark was so loud that it drew the attention of Bulls captain and Springbok No 8 Duane Vermeulen.

"Duane just looked at me and with a big smile said‚ ‘No man. Just relax’. I lost my head a bit and that was a big moment for me‚" he said.

Gans was one of the leading performers for the Bulls during the Super Rugby Unlocked tournament – he was the leading try-scorer with five‚ while his magic feet and time on the ball creating a number of attacking opportunities.

"He [Vermeulen] was so calm in the way he said it. I was so frustrated‚ but he could see that if we just did what we needed to do as a team rather than panic‚ we’d still be in the game.

"That calmed me down‚ and it helped to calm the whole team down as well‚" says Gans.

Gans is determined to soak up this kind of experience from the senior players at the Bulls as he begins his journey at the union‚ and this is being showcased through the “Future Champs” campaign that is putting the spotlight on the next generation of the team's stars.

Throughout his successful time with the Blitzboks and to last year when he joined the Tshwane side‚ the 23-year-old centre/winger has shown a hunger to learn.

NEW EPISODE! Vodacom Bulls speedster Stedman Gans might be quick, but he’s not quick enough to dodge the pranksters in this week’s episode of ‘Pranks’. Watch the full episode only on the Vodacom Bulls App: https://t.co/1Bqwjv9lW3 pic.twitter.com/Myds9m01yK

"It’s daunting stepping into a high-performance environment like I did with the Sevens team and now with the Bulls. Luckily‚ there are experienced players here and the most important thing for me is to learn from them as much as I can‚" he said.

"But I also believe strongly that as rugby players we should push forward and bring our own personality to the game. Rugby players in South Africa all try to fit into one box‚ but I think people would like to see who you are as a person outside of rugby as well.

"So‚ I see myself bringing my abilities as a rugby player to the Bulls‚ but also much more than that. I would really like to bring my personality and my past experiences to this team and put more of myself into the rich history of this team."

Gans remembers moving from Vredenburg as a young boy to Pretoria where he joined Hoërskool Waterkloof.

"Moving was obviously difficult for me and at the time I didn’t see the benefits‚" said the dreadlocked ace.

Steyn's plea to the Bulls youngster ahead of Currie Cup semi: don't get overawed by big occasion

Experienced Bulls fly-half Morné Steyn has implored the younger players to avoid being overwhelmed by the big occasion when they face the Lions in ...
Sport
1 year ago

"But if I could advise any other young player in a situation like that‚ just make the best out of your current situation‚ whether you agree with it or not."

Gans said self-doubt should never be allowed to prevail.

"Self-doubt is the hardest thing I’ve had to overcome. If you want to be a champion‚ self-doubt can never be in that equation. So‚ the biggest thing for me is to just grow that self-belief in my abilities‚" he said.

Gans was recently ruled out for three months due to an ankle injury and he has taken the setback.​