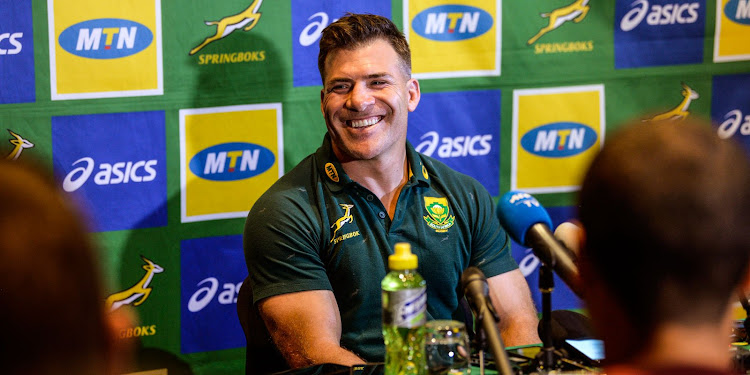 At 38‚ the Peter Pan in the Bok squad‚ Schalk Brits became the second oldest try scorer in Rugby World Cup history against Namibia.

The oldest was 40-year-old Uruguayan Diego Ormaechea who scored against Spain in 1999.

Brits is the second oldest Springbok after Victor Matfield to play a RWC match.

Brits who was deployed at No 8 as a means of giving him game time excelled in the second half as the Boks beat Namibia 57-3 in Toyota.

“It wasn’t a surprise to me what he brought to the party. I’ve known him for 20 years‚” said Erasmus about Brits.

He then went on to praise Brits’s leadership and the value of having a player with the dual qualities of experience and a cheerily upbeat disposition.

Brits‚ of course‚ with his trademark wide grin‚ lapped it all up.

“It was quite emotional (to captain the team)‚" Brits said.

"Being 38‚ being involved and leading your country. When you get on to the pitch‚ you just try to focus on the next task.

With the competition still coming to terms with Japan’s shock win over Ireland, South Africa romped home 57-3 in the so called African Derby to get ...
Sport
2 years ago

“It's special. Even just to be part of the squad is emotional and an honour for me – if I'm playing or holding bags‚ whatever I can do for my country‚ just to make this team better‚ and give us a chance to win this World Cup.

“It’s an unbelievable honour to be part of this group. To captain the side is a dream come true‚ in a World Cup. The players made it very easy on the pitch. Rassie had a set structure and plan that he wanted us to execute in the game.

“Some of us hadn’t played in five or six weeks‚ so it was a great way to get on to the pitch. You could see there was a bit of match sharpness that lacked a little bit. Aled (Walters) the fitness trainer has done everything possible to get us sharp to play.”

His role will be a peripheral one for the remainder of the campaign unless injury rules otherwise.

Malcolm Marx and Bongi Mbonambi are the established hookers in the go-toe match 23 and they are likely to be both included in the squad for Friday’s engagement against Italy in Shizuoka.