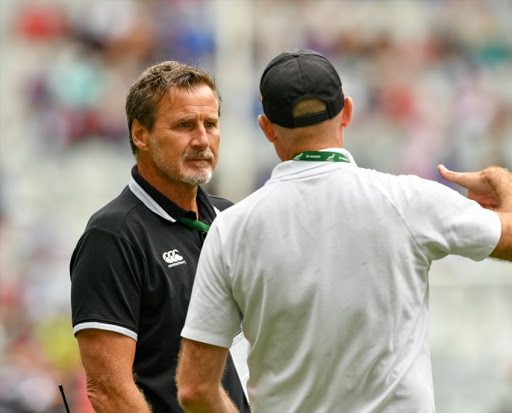 Their first home game last season was a sloppy 24-all draw against the Waratahs‚ a game where coach Daryl Gibson said they had no business getting points out of.

The Blues‚ who look a far better side in one match against the Crusaders last week than they did all season last year‚ lie in wait for a Sharks side that easily saw off the Sunwolves in Singapore.

Du Preez has made no secret of the designs the Sharks have in regards with the Super Rugby play-offs and understands the key to getting that far is a good home record.

To that extent‚ Du Preez has named an unchanged starting line-up for Saturday but two Springboks in Thomas du Toit and Curwin Bosch named on the bench.

“It's important that we win all our home games. If we want to remain in play-off contention‚ you have to win all of your home games. This game is a massive one for us‚” Du Preez said.

“It's good to have continuity but having said that‚ we'll rotate the team so players will get game time. That's going to be a key to our potential success this season.”

Under Leon McDonald‚ the Blues played with a better sense of purpose and structure.

It's that structure that may worry the Sharks as a loose-cannon 2018 Blues side played exactly into the Sharks' hands last year in Auckland.

The Sharks won 63-40‚ starting a superb run of results against New Zealand teams where they won three and lost two matches.

The Blues have dropped Ma'a Nonu but they have Sonny-Bill Williams starting at inside centre. They also have All Black props Ofa Tu'ungafasi and Karl Tu’inukuafe starting; an admission of the tight five shift the Blues have to put in Kings Park.

Du Preez is aware of the better shape the Blues are in this season but Durban is a notoriously difficult place to play rugby in February.

“They're a formidable side and you'll have seen how well they played against the Crusaders last week. However‚ we can't worry too much about them but we have to do what we have to do and we've spent a lot of time on that‚” Du Preez said.

“The conditions are going to be difficult on Saturday. It's going to be hot and humid but that should work for us because we're used to it.”