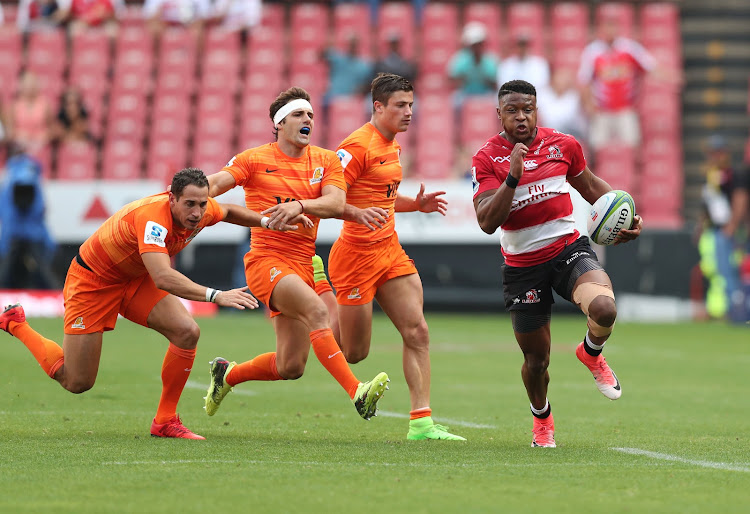 Aphiwe Dyantyi of the Lions evades tackles from Joaquin Tuculet, Nicolas Sanchez and Bautista Delguy of the Jaguares to score during the 2018 Super Rugby match at Ellis Park, Johannesburg on 24 February 2018.
Image: Gavin Barker/BackpagePix

Rugby may be a team sport but each unit has that one player that embodies the mental state of the team.

At this present moment‚ Aphiwe Dyantyi is exactly that for the Lions.

During their 47-27 win against the Jaguares at Ellis Park on Saturday‚ the hosts were trailing 10 after 19 minutes and were inexplicably profligate.

From somewhere and somehow‚ Dyantyi provided the catalyst for the fight-back.

He then became the major rugby chemical reactant in the second half as the Lions swiftly pulled the rug from under the Jaguares’ feet.

Lions coach Swys de Bruin knows what he has in Dyantyi and wants to make sure he nurtures his talent to the fullest.

“He’s special and he had another good game‚" De Bruin said.

"I have to encourage the absolute effort to try things when it’s not on. That’s what you want.

"He gets very good ball from the forwards for starters because we need to be careful in terms of singling out just one player.

"If we really look after him very well and make sure he earns his colours‚ he’ll become a legend.

“He’s got an honours degree‚ he’s a mature young man and he’s a clever guy. I’m very happy with him at the moment.”

Dyantyi’s superhuman efforts failed to gloss over the fact that the Lions weren’t quite up to their high standards.

They are two games into the season and while they’re doing a lot of things right‚ there’s also the feel they’re still a work in progress.

Their scrum is fearsome and when their offloading game comes off‚ they pick out gaps no one can see.

However‚ there’s still the worrying factor of Malcolm Marx’s wonky line-out radar and the final passes that didn’t go to hand after scything line breaks.

De Bruin said these teething issues can be fixed but it’s a case of when because the Lions Super Rugby schedule isn’t going to get any easier.

“A lot of the lineouts we do very quickly because we want to speed the game up and that’s where the mistakes creep in.

"This was our second game and I must say we had some fantastic line-breaks.

"The specific one was the one that led to Sylvian Mahuza try in the far corner was one to remember‚” De Bruin said.

“The first 20 minutes was so frustrating.

"It was one of those where we were so keen on playing and it was mistake after mistake.

"We must look at the end result against an almost full-on international side. We’ll take it.”

Bulls new era under coach John Mitchell in Super Rugby is up and running after they recorded a hard fought and vital 21-19 victory over fancied ...
Sport
4 years ago

Bulls to unleash Bholi on Hurricanes

Bulls coach John Mitchell will unleash highly promising flanker Thembelani Bholi in their first Super Rugby match against the Hurricanes at Loftus on ...
Sport
4 years ago

Stormers beef up for Waratahs

Stormers coach Robbie Fleck has beefed up his side with inclusion of lock Pieter-Steph du Toit‚ centre JJ Engelbrecht and fullback SP Marais for ...
Sport
4 years ago

A massive scrum by a depleted Stormers pack won the home team a game that should never have been that close to start their Super Rugby campaign on a ...
Sport
4 years ago
Next Article