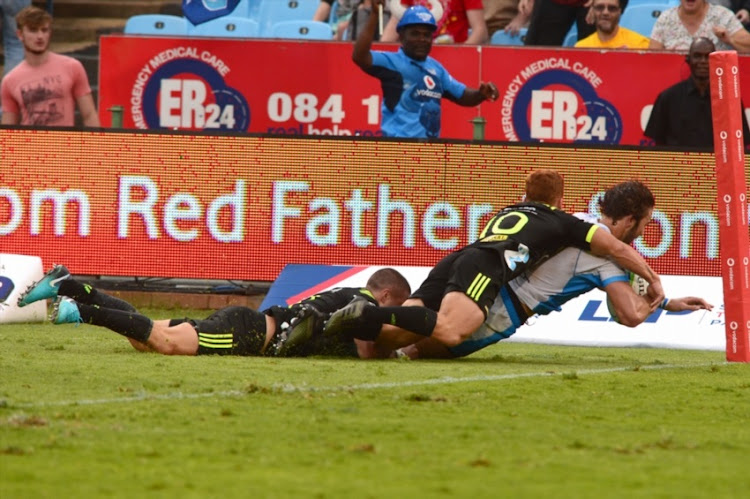 Lood de Jager of the Bulls scores during the Super Rugby match between Vodacom Bulls and Hurricanes at Loftus Versfeld Stadium on February 24, 2018 in Pretoria.
Image: Lee Warren/Gallo Images

Bulls new era under coach John Mitchell in Super Rugby is up and running after they recorded a hard fought and vital 21-19 victory over fancied Hurricanes in Pretoria on Saturday.

Though they emerged victorious, their work was not without teething problems as at some stages they forgot the basics of being effective at this level to make things difficult for themselves.

Mitchell and his think tank will have to address some worrying issues like handling, distribution, discipline and coordination if they are to go on and make a statement this season.

The one important thing that Mitchell will not be too concerned about is his team’s fighting spirit, which was absent last season under the troubled reign of Nollis Marais, as they never buckled up under spells of sustained pressure to eventually beat the Hurricanes for the first time since 2013.

The Bulls take on bitter rivals Lions on Saturday at Loftus, who beat the Jaguares in the earlier kickoff  on Saturday 47-27, with renewed hope and confidence sky high after claiming this scalp.

They took an early lead fourth minute through Johnny Kotze who was released on the left wing by Jesse Kriel for an unconverted try but Handrè Pollard made up for his earlier conversion miss to convert a penalty a few minutes later.

In the eleventh minute, Hurricanes scored their first try through Ricky Riccitelli which was not converted by Ihia West after a spell of sustained pressure on the Bulls defence.

Hurricanes took the lead for the first time in the match after eighteen minutes in fine style when Wes Goosen deceived the Bulls defensive line with a clever up and under from his half to score a try that was converted by West.

Faced with the tough job of pulling themselves back into the game, Bulls suffered a numerical blow when Pierre Schoeman was shown a yellow card for using a swinging arm which was deemed dangerous by referee Rasta Rasivhenge.

Despite playing a man short, Bulls managed to increase their lead in the game by one point when Lood de Jager showed pace and physical power to touch down on the corner but unfortunately Pollard did not convert.

On the stroke of halt time, Pollard increased Bulls’ score to 16-12 with a penalty after Vince Aso was punished for an offside infringement inside his own half.

Hurricanes regained their lead nine minutes after restart when All Blacks star Beauden Barrett found the gap in the Bulls defensive line t ouch down for West to have an easier task of converting from a good angle.

But, the Bulls retook the lead ten minutes from time through Schoeman’s powerful drive near the corner flag with Diwan Rossouw failing to convert and the home side held on for dear life to record this vital home victory.