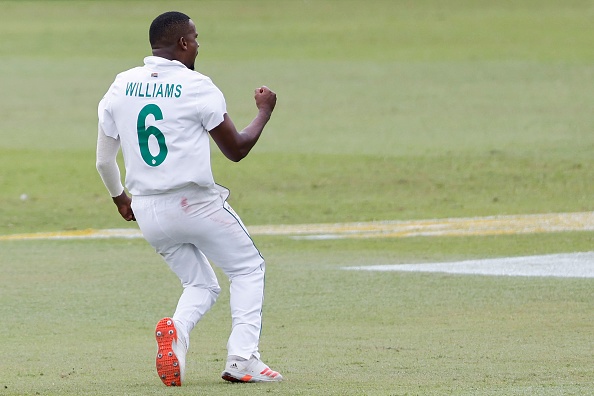 South Africa's Lizaad Williams celebrates the dismissal of Bangladesh's Litton Das during the third day of the first Test cricket against Bangladesh at the Kingsmead Stadium in Durban.
Image: MARCO LONGARI/AFP via Getty Images

The Proteas' Lizaad Williams was overcome with joy and emotion when he finally bagged his first Test wicket with the scalp of Taskin Ahmed in the first session of day three at Kingsmead in Durban on Saturday.

Day two on Friday belonged to spinner Simon Harmer with four wickets but the fast bowlers dominated with the four wickets on Saturday, where Williams took two and Wiaan Mulder and Duanne Olivier contributed one each.

“Delighted, to be honest,” Williams said about his first Test wicket.

“Playing Test cricket was always my dream, growing up it is something that you work towards. It is the most difficult format in the game and you want to test yourself in difficult situations. I am delighted that I can contribute towards the team.”

Asked about the Durban wicket that produced good competition between ball and bat, Williams said it is going to require a lot of work because SA are bowling last.

“I do feel once the ball gets a bit older it is going to be difficult for both batsman and bowlers because it will be softer, but then again, that’s why it’s called Test cricket.

“Everything can’t just fall in your favour. It’s not like I have played a lot of international cricket because this is only my first Test game. I do think there is a result in this wicket but it’s going to require a lot of hard work from us.”

Lizaad Williams has claimed his maiden Test wicket during the morning session of day three of the first Test against Bangladesh at Kingsmead Stadium ...
Sport
4 months ago

After the success of Harmer on Friday, the Proteas brought their fast bowlers into play on Saturday morning. Williams said he was not involved in the decision.

“I don’t have insight of how they spoke about what the balance of the side was going to be, but the coach and the captain did speak to the new guys coming into the squad on, if there are opportunities to play, what kind of roles we are going to fulfil in the bowling unit.

“I wasn’t aware they were going to pick two spinners, I don’t know \when last it happened in SA but so far so good.”

The star performer on Saturday was little-known 21-year-old Mahmudul Hasan Joy who scored his maiden century and also became the first Bangladeshi to score a hundred against SA.

“I don’t think we knew too much about him and his style of play. I reckon he is new in the international Test arena but I do feel that he had a very good game plan,” Williams said.

“He didn't take the short ball on, he played spin well. When the field was up he popped the ball up and when the guys were pushed back he milked the singles. Credit to him because he really played really well and it was a very good innings.”