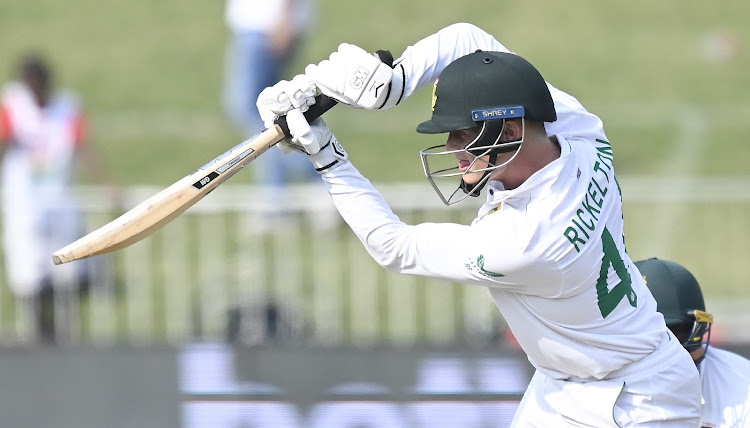 Ryan Rickelton in action during the opening day of his debut Test match between South Africa and Bangladesh at Kingsmead Stadium in Durban.
Image: Gerhard Duraan/BackpagePix

Middle order batter Ryan Rickelton was a combination of nerves and excitement ahead of his Test debut against Bangladesh at Kingsmead Stadium in Durban on Thursday.

After a while on the fringes, the 25-year-old and highly promising Rickelton benefited from the absence of struggling Aiden Markram and Rassie van der Dussen, who are at the IPL.

Rickelton, who scored 21 off 41 before he was caught by Mominul Haque at mid-on from Ebadot Hossain, debuted with fast bowler Lizaad Williams, who benefited from the absence of Kagiso Rabada, Lungi Ngidi and Marco Jansen.

“I found out on Wednesday just after lunch. The boss toldm me I was going to play,” he said as he reflected on his big day.

“I was a bit nervous but at the same time I was looking forward to getting out there and once I got out there I was more excited to play. I was excited to finally get the opportunity and ready to stamp myself on international cricket and the game.

“I wanted to show what I can offer. I whipped up the reverse sweep a little bit early but it is one of those things. I felt more excited rather than nervous to get the opportunity to represent my country.

“I am sad didn’t manage to get to the end of the day but it was a nice start for me and hopefully I can take some momentum from here going forward.”

After four dot balls, Rickelton finally got off the mark by playing a risky reverse sweep behind square on the off-side for a boundary but said it was a shot he trusts.

“I sat back because I was a too nervous and tense. I was planting my front foot quite early to the off-spinner (Mehedi Hasan Miraz). I took a risk but it is not the riskier shot for me and luckily it worked and got me away.

“It is not my riskiest option and at the end of the day I was comfortable to play it.”

Over the past few months Rickelton has been on the lips of most South Africans with Markram struggling with form and was tipped to play against New Zealand but his debut was delayed.

“I have been desperate to play for SA. I have been trying to put my hand up domestically, obviously try to score runs and try to make a bit of a name for myself.

“I have been playing quite nicely going into that New Zealand series and I was jumping to get a game there. Those six weeks off and not playing any cricket and to come back get a few low scores in domestic cricket kind of makes you think twice about it.

“Boucher said to me it is the beginning of a new phase, something new is happening and I am grateful to have the opportunity. I hope I can make it work and give myself the best opportunity to show what I have got.”