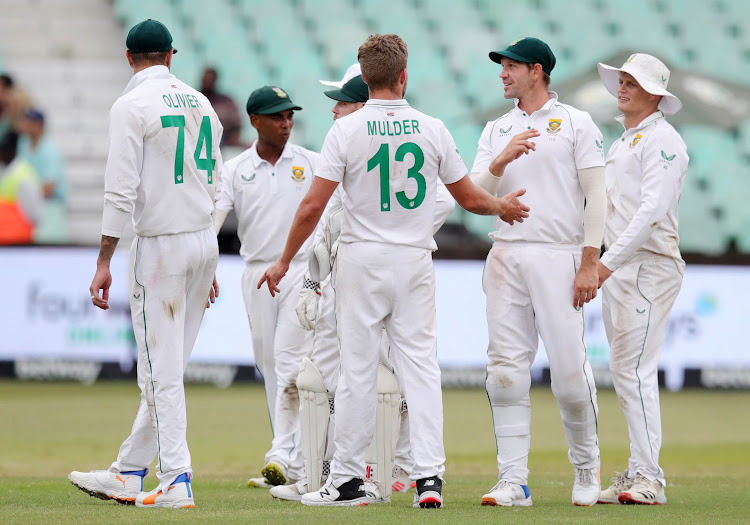 After three days of sometimes compelling Test cricket here at Kingsmead in Durban, SA have their noses in front but the key is how they are going to negotiate their second innings.

When stumps were called on Saturday to bring to an end day three proceedings, the Proteas were sitting on 6/0, a lead of 75 with captain Dean Elgar on three and Sarel Erwee on two and lots of work to take this game out of reach of the Tigers.

Before Elgar and Erwee returned for the second batting innings during the third session on Saturday, SA had bowled out Bangladesh for 298 with Simon Harmer claiming four and Lizaad Williams taking three wickets.

Other contributors to the wicket-taking column for SA were fast bowler Duanne Olivier and all-rounder Wiaan Mulder who returned with one scalp apiece for their efforts on the Durban pitch that produced competition between bat and ball.

The star man for the Proteas with the bat during the first innings, where they scored 367, was middle-order batsman Temba Bavuma who was unlucky to be bowled out on 93.

It was for the second time in his career that Bavuma suffered the heartbreak of being bowled in the nineties and the wait for his second Test ton to add to the one he scored at Newlands against England in 2016 continues.

Other notable contributors to the scoreboard for the Proteas were Elgar with 67, his opening partner Erwee with 41 and Simon Harmer crucial 38 in the lower order.

In their reply, Bangladesh’s batting fightback was led by 21-year-old Mahmudul Hasan Joy who banged his maiden Test century (137) during the third day on Saturday.

In the process of his defiant and well-taken knock, the young opener also registered his name in history as he became the first Bangladeshi batter to score a Test hundred against SA.

Largely due to the gallant efforts of Mahmudul, Bangladesh added 200 runs during their batting on Saturday which went a long way in significantly reducing the deficit.

Day three on Saturday started with Bangladesh in all sorts of trouble with a score of 98/4 after they lost Shadman Islam (9), Najmul Hossain Shanto (38), Mominul Haque (0) and Mushfiqur Rahim (7) on Friday afternoon.

The first session was good as they only lost the one wicket of nightwatchman Taskin Ahmed (1) and it was a significant moment for Lizaad Williams as it marked his first Test wicket.

The Proteas came back more determined after lunch as they went on to claim two more wickets with Williams getting his second wicket when he clean bowled Liton Das having scored 41.

Bangladesh’s momentum was broken when Yasir Ali was unfortunately run out by a combination of Ryan Rickelton and wicketkeeper Kyle Verreynne having contributed 22 runs.

Wiaan Mulder joined the wicket-taking party after tea when he removed Mehidy Hasan Miraz (28), and he was joined by Duanne Olivier who was responsible for the demise of Khaled Ahmed without scoring.

The last wicket to fall for Bangladesh was their star man of the day Mahmudul who missed out on an opportunity to carry his bat as he was caught at slip by Harmer off Williams.

During his successful stay at the crease since the Tigers started batting on Friday afternoon, Mahmudul was involved in significant partnerships of 55 off 150 with Najmul Hossain and of 82 off 171 with Liton Das.

When SA bowled out Bangladesh during the third session, they enjoyed a lead of 69 runs and it increased slightly to 75 when stumps were called early due to bad light.

The Proteas will continue on day four on Sunday with Elgar on three and his partner Erwee on two and looking to significantly increase their advantage and possibly take the game away from Bangladesh.

The advantage of scoring a big second innings lead is possible for SA because they still have capable batters like Keegan Petersen, Temba Bavuma, Ryan Rickelton, Kyle Verreynne  and Wiaan Mulder in the bank.

For them to get what they desire on Sunday, the SA batters will have to deal with the Bangladesh bowling attack that has already proved too be skilful.

Bangladeshi bowlers Taskin Ahmed, Ebadot Hossain, Khaled Ahmed, Mehidy Hasan Miraz and Mominul Haque will fancy their chances because of the nature of the wicket that has produced good competition between bat and ball.

Conditions may even work in Bangladesh’s favour as the pitch started to turn during the third session but the South Africans should be able to handle whatever is going to be thrown at them on Sunday.