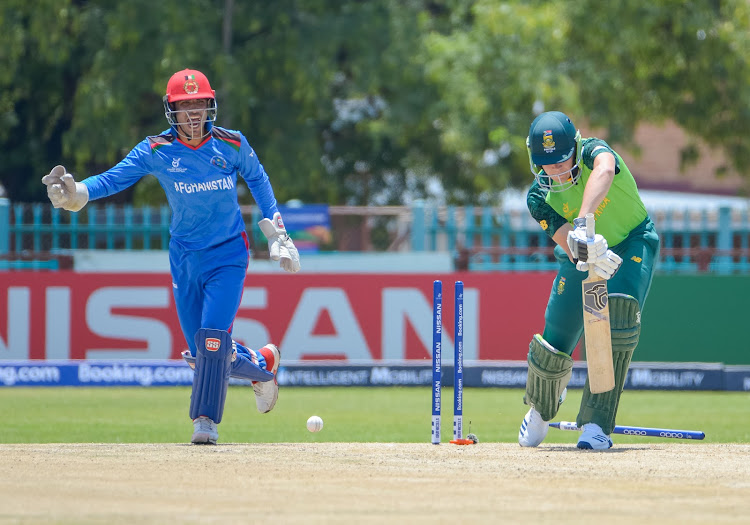 Gerald Coetzee of South Africa U 19 bowled by Shafiqullah Ghafari of Afganistan U 19 and Mohammad Ishaq Shirzad(W/K) celebrating the wicket during the 2020 ICC U19 World Cup game between South Africa and Afghanistan at Diamond Oval in Kimberberley on 17 January 2020.
Image: © Frikkie Kapp/BackpagePix

South Africa's Under-19s are left with more searching questions than answers after their comprehensive and embarrassing seven-wicket humbling at the hands of Afghanistan in Friday’s opening ICC Cricket World Cup fixture at the Diamond Oval.

After being bundled out for 129 in 29.1 overs after winning the toss and choosing to bat first‚ the visitors were untroubled in their chase‚ reaching their target with 150 balls to spare.

With SA Under-19 unable to play coherent cricket for the better part of a year‚ which saw them lose seven consecutive matches to Pakistan last year while losing to Zimbabwe in a recent Quadrangular Series‚ this result maybe should have been expected.

The scale and manner of the defeat‚ coupled with how they were outplayed‚ is the major concern.

Such was the ease of the run-hunt that highlighted the toothless nature of South Africa's showing‚ Afghanistan scored at more than five to the over in their chase‚ with opening batsman Imran Mir (57) reaching his 50 off just 37 balls.

After losing captain Farhan Zakhail (11) caught behind by Khanya Cotani off Achille Cloete (2/20)‚ Mir and Ibrahim Zadran (52) shared a second-wicket stand of 80 off just 88 balls that put the game beyond doubt.

Zadran and Mir didn't see out the chase‚ falling to Tiaan van Vuuren (1/14) and Cloete respectively‚ but the inch-perfect demolition job was done.

Their win was also set-up by their spinners‚ who's web entrapped the hosts faster than quicksand.

At the core of SA's problem was their inability to deal with the spin threat posed by Shafiqullah Ghafari (6/15)‚ who turned the game on its head initially with a catch to get rid of SA's captain Bryce Parsons before working his leg-spin magic on SA's middle-order.

He ran through the middle-order with a delightful mix of befuddling turn and flight that was higher-grade stuff for SA's lower grade batting.

Levert Manje (0)‚ Jack Lees (0)‚ Khanya Cotani (8)‚ Van Vuuren (5)‚ Gerald Coetzee (28) and Cloete (3) were either bowled‚ leg-before or caught at the wicket as South Africa simply had no response to Ghafari's nine overs of wrist spin magic.

Left-arm wrist-spinner Noor Ahmad (2/44) initially broke the back of SA's batting when he removed captain Bryce Parsons (40) and Luke Beaufort (25) to set the middle-order collapse in motion. In the space of 11 overs‚ South Africa fell from 62/2 to 90/8.

Ahmad was collared by the two‚ who staged a breathtaking recovery after left-arm seamer Fazal Haque Farooqi (2/43) prised out openers Jonathan Bird (0) and Andrew Louw (3) with a set of left-arm in-swingers that would have made Pakistani legend Wasim Akram proud.

Parsons and Beaufort staged a wonderfully belligerent recovery with their 50-run partnership coming off only 48 balls.

When they fell‚ the rest collapsed like dominoes and it was up to Coetzee to add some respectability to the total with a 23-ball knock that contained four fours and three big sixes.

South Africa's next game is against Canada in Potchefstroom on Wednesday.