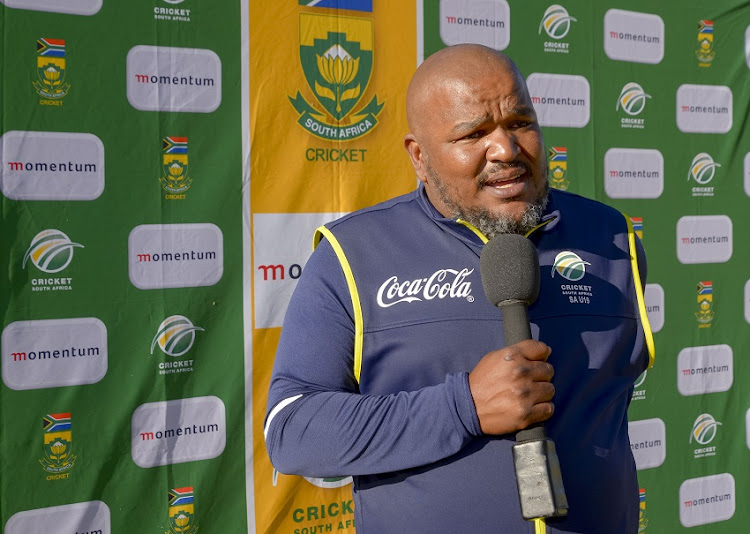 Greater game awareness will be crucial to South Africa’s prospects in the Under-19 Cricket World Cup that starts on Friday.

Coach Lawrence Mahatlane‚ whose team plays in the opening match against Afghanistan in Kimberley‚ wants his charges to approach the big moments with greater clarity of thought‚ as well as conviction in the matches that matter.

“Game awareness has been our biggest drive over the last month‚” said Mahatlane about the finishing touches in the preparation to a tournament they haven’t won since 2014.

While he believes his team is ‘cricket fit’ as a result of the number of matches they have played‚ the coach would have preferred his batters to take full toll.

“Hopefully we can find our batting rhythm. I don’t think as a batting group we have clicked so far.

"The guys got in but they need to go on and score big. We need big hundreds.”

He agrees the flat surfaces in Kimberley‚ Potchefstroom and Bloemfontein where they will play Afghanistan‚ Canada and the United Arab Emirates respectively in Pool D‚ will help them in that pursuit.

Apart from time in the middle in the build-up‚ the coach was desperate to impart the significance of what his team represents to his players.

“We went into camp on the 28th of November. We tried to expose them to as much of the country as we could.

"We spent a day in Soweto‚ the boys went down to Vilakazi Street‚ we went to East London and we spent time in KZN. It has been about talking cricket and understanding the game and how it works.”

The team wrapped up their preparations for the tournament with an eight-wicket win over minnows Nigeria in Pretoria on Tuesday.

“We would have loved to bat first‚” Mahatlane said after his team chalked off the 62 victory total.

“We wanted to give our batters a bit of a chance‚” he said of an opportunity missed to imbue his side with confidence.

The destruction with the ball was shared with two wickets each for Mondli Khumalo‚ Merrick Brett‚ Odirile Modimoakane‚ Tiaan van Vuuren and captain Parsons.

The one potentially disturbing aspect about the Nigerian innings from a South African perspective was that it included 17 extras which included 13 wides.

Mahatlane‚ however‚ was nonplussed with the high proportion of wides.

“I thought the umpires were being a bit harsh with eight of our bouncers. I’m not too worried about that.”

In pursuit of the paltry total South Africa lost Bird and Parsons.

The latter‚ however‚ didn’t depart until he blazed 48 off 28 balls including nine fours and a six.

Opener Louw suffered the rare distinction of facing the first ball of the innings in a chase but failed to get off the mark by the time the winning runs were completed.