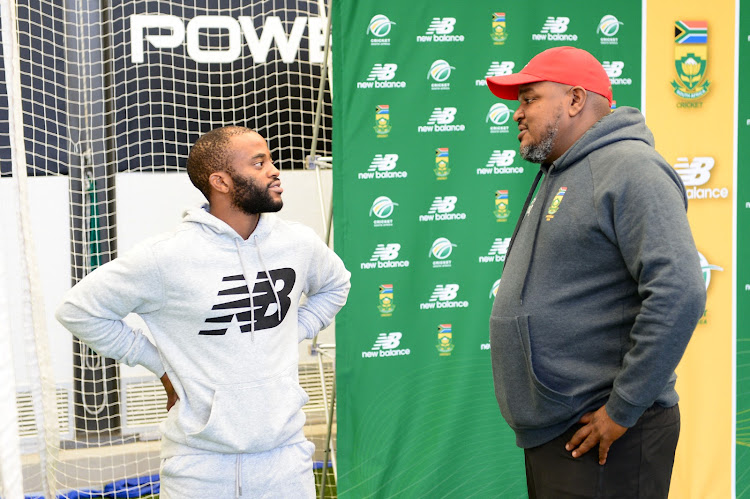 Temba Bavuma and Lawrence Mahatlane during a Coaching Clinic on day 2 of the 2018 Coca-Cola Schools T20 Challenge National Finals at the HPC, University of Pretoria on March 17, 2018 in Pretoria, South Africa.
Image: Lee Warren/Gallo Images

Pressure has been the by-word of the SA Under-19 side's frenzied build up to the ICC Under-19 Cricket World Cup that gets underway with the opening match between the hosts and Afghanistan in Kimberley on Friday.

SA Under-19 coach Lawrence Mahatlane looked at it from a different perspective‚ saying that pressure is a privilege and not something to worry about.

With a set of indifferent 50-over results in the past year‚ there's a fair bit of pressure on Mahatlane and his charges to qualify for the Super League quarterfinal‚ which is the main play-off stage.

Should they get that far‚ there's the distinct possibility of meeting one of India‚ Sri Lanka or New Zealand.

India are a strong side and Sri Lanka beat SA in a warm-up game‚ but New Zealand were comfortably seen off in the Quadrangular Series.

However‚ SA need to navigate their opening game before entertaining thoughts of the Super League stage.

“Pressure is a privilege. The fact that you're sitting here means someone recognised you've got the ability to handle the pressure.

"There are many young men who are not here‚ who wishe to be here. It's about them expressing themselves and showing off their abilities‚” Mahatlane said.

In two fixtures in a tour of India last year‚ SA beat Afghanistan by nine and 55 runs respectively while losing to India A Under-19 heavily‚ and fell to a one-run defeat to India B Under-19.

Clearly‚ South Africa will have to top Group D and hope India clean out their opponents to avoid them in the quarterfinals.

SA Under-19 captain Bryce Parsons is aware of how tough Afghanistan will be having played them in India.

“They're a really good side.

"We played against them in India and we saw their qualities. We know that at Under-19 level‚ they're really strong but we're just going to focus on ourselves and we know what we need to do‚” Parsons said.

“We've put a lot of preparations into ourselves and we'll try to do the skills we've been working on over the last year or so to get to this moment.”

SA's following fixtures will be against Canada in Potchefstroom on Tuesday and the United Arab Emirates next week Saturday.