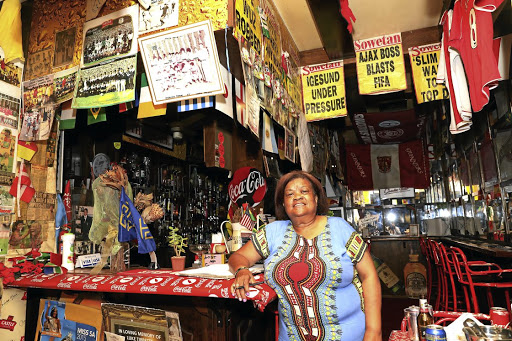 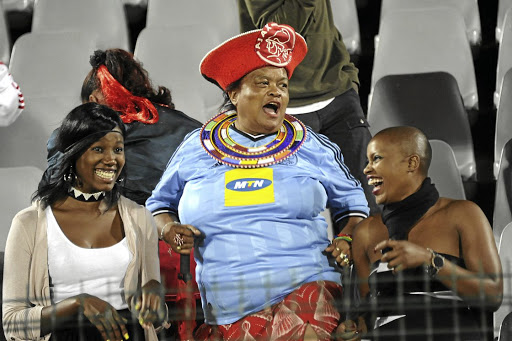 There's an estimated 3.5 billion football fans around the world, some of whom are eccentric characters with a peculiar way of expressing their passion for the beautiful game.

There are those who will paint everything in their households in the colours of their favourite teams. And, of course, their dress sense is as weird as they come.

Gladys Gailey was born and lived all her life in Johannesburg. And she's a die-hard fan.

But while most fans follow local teams, her favourite side is 1400km away - relegation- threatened Cape Town City.

Her first team from the Mother City was Ajax Cape Town when it was founded 20 years ago, after Cape Town Spurs merged with Seven Stars.

This is where Steven Pienaar made his professional debut in 1999 before he hit the big time in Europe with Ajax Amsterdam, the mother club. 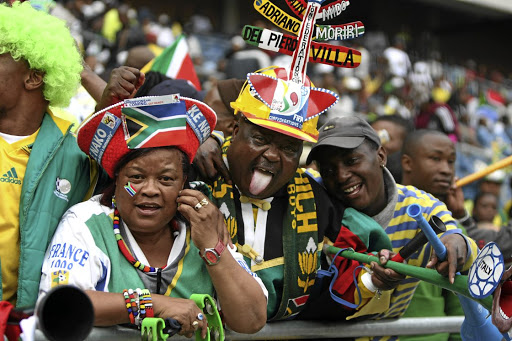 Their first official match was against Kaizer Chiefs during the Iwisa Charity Spectacular, which they won 1-0. It was dubbed the upset of the year. Another highlight was in 2000 when they humiliated Orlando Pirates 4-1 at FNB Stadium during the Rothmans Cup final to earn their first championship trophy.

They won the same cup eight years later - now renamed the Telkom Knockout Cup - when they beat the same Pirates 2-0.

When Ajax were relegated in 2018 after they were docked seven points for fielding an ineligible player, the Urban Warriors' number one supporter added Cape Town City as her other team. Gailey says her support for City is on account of John Comitis, the club manager who, she explains, offered her financial support to enable her to attend matches.

"I regard John Comitis in high esteem and support City by attending their games when they are playing in Gauteng," she says.

Born in Bridgeman Memorial Hospital (now Garden City Hospital) in Mayfair, she was raised in old Sophiatown just before the infamous forced removals in 1955.

The family was then relocated to Western Native Township, which was eventually changed to Westbury.

"I was very young. I only know that I attended Sunday school at Father Huddleston's Christ the King Anglican Church on Ray Street. We lived on Good Street where the Odin Cinema and the 39 Steps, one of Sophiatown's famous shebeens, stood.

"My parents also ran a shebeen. They used to tell us young ones stories about how they were harassed by the authorities for selling liquor.

They told us about the constant raids by the Black Jacks, the notorious municipal police. They would dig holes in the yard to hide the alcohol from the cops.

"My parents said although selling beer was a difficult and dangerous way of making a living, they managed to support the family and even pay for my elder brothers' education."

Apparently her parents were progressive socialites who scorned colour or race prejudice.

They used to host famous people, including international stars like singer Stella Starr.

The family was soccer mad from the beginning. Her husband Basil Gailey captained a local amateur side named Ipswich Town FC.

Her late brother, Jimmy "Asval" Smith, was a goalkeeper for Kaizer XI, an invitation side and forerunner to Kaizer Chiefs in 1969.

Pretoria-based Vincent "Tanti" Julius was another coloured player who was selected to play for the historic side, a rare and versatile talent between the goalposts and in front of them.

Bobo Smith played for Aberdeen FC, another local side while another brother, Cyril "Ting Ting" Smith plied his trade with Chesterfield FC, which was affiliated to the Transvaal Soccer League.

He was then selected for the Coloured Eleven, a national side during the apartheid years when authorities decided to segregate sport along racial lines - an infamous decree that cost top teams like Orlando Pirates quality coloured players such as Bernard "Dancing Shoes" Hartze, Hans "Al Die Hoekies" Moses, Ralph "Uil" Hendricks and Gerard van der Haar.

The jury is still out on what these illustrious players could have done for the game had authorities not introduced the colour bar in sport.

Those who saw them in action swear that they were simply magical.

Gailey says most of her siblings and her father were Chiefs supporters.

But she eventually switched her allegiance in 1999 as "the team didn't value dedicated supporters".

She says all that changed when she joined Ajax and she was recognised as the new team's number one supporter.

"I still wear my Ajax regalia, including my gold ring and silver bracelet," she notes.

Not surprisingly, Gailey has been a staunch supporter of Bafana Bafana since the country's readmission to international sport in 1992.

The high point of her journey as a supporter was in 1998 when South Africa played in the Fifa World Cup in France.

A banker by profession, she was working at FNB's vehicle finance division when she decided to resign.

"I then used my savings to buy two tickets to the global showdown in France, pay for accommodation and other expenses.

"Philippe Troussier, the coach, was against fans interacting with players," she recalls.

"It was strange and bewildering but one player, Quinton Fortune, was courageous enough to reason with him. 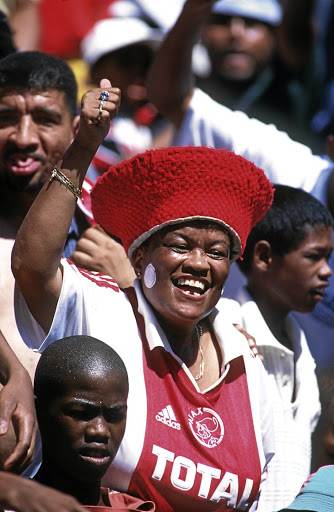 "And thereafter we were allowed to talk to them and wish them all the best for the few games they played."

SA played three matches, losing 3-0 in the opening game against the hosts.

They then drew 1-all against Denmark with a goal that came via Benni McCarthy's boot.

In their last game against Saudi Arabia, they conceded two penalties and settled for a 2-2 draw. Striker Shaun Bartlett scored a brace but it was not enough to secure Bafana Bafana a place in the next round.

It was interesting to note that on the day of the interview Gailey was proudly wearing a 1998 World Cup jersey which, despite its worn-out state, she lists among her treasured earthly possessions.

She is the treasurer-general of the National African Football Supporters Association (Nafsa), a 7,000-member national body that is recognised by the PSL, Safa and the government.

Although the organisation boasts 52 branches in the country, she's proud to note that Westbury is the only "legitimate" branch.

"We are the only branch with an active bank account and we have raised funds for events like the 2002 Korea/Japan World Cup."

Nafsa is a recipient of the Special Minister's Award and Gauteng Premier's Award for contributing to the success of the 2010 Fifa World Cup.

Unfortunately, she says the situation for supporters is not rosy.

"There are cliques, discrimination and favouritism. A select few of the supporters from big clubs enjoy preferential treatment while some of us don't get invited to events like awards ceremonies.

"We have been trying to address these problems with Safa officials for years but our grievances have been falling on deaf ears."

Following her World Cup experience in France, she opened a clubhouse and bar named The Place, the first small business of its kind in South Africa. And as her business card indicates, it's "a tourism hub and the place for 2010 and beyond".

Situated on the border between Westbury and Newclare, The Place is a meeting point for supporters and an outlet where tickets for games can be collected. Patrons can also enjoy games on the huge plasma screen over drinks.

A framed Steven Pienaar jersey occupies pride of place in this permanent exhibition.

But that's not all.

A small percentage of these newspaper articles tell the story of a few of the country's music idols of yesteryear - stars like Richard Jon Smith, Neville Nash, Joy, Sipho Gumede, Harari and their young keyboard player, the late Neo Segona.

The Place is a unique gallery whose items reflect Gailey's journey as a die-hard supporter. It's also a library and museum of the South African story in sport.

"I was not consulted and never paid a cent for using my picture on their calendars," she says in reference to 2002 and 2011 calendars by multinationals Total and PricewaterhouseCoopers respectively.

"I can't even open a lawsuit against them because they are powerful and I can't afford lawyers."

I can't even open a lawsuit against them because they are powerful and I can't afford lawyers.

Despite the injustice, the two almanacs are among her prized collection in this sport and music hall of fame. Since its opening on August 1 1998, The Place has been receiving an average of 25 international visitors a month, notably from Emzingo, a global body that works with exchange students in the academic and business spheres.

She says international visitors also included a Fifa delegation that came to endorse the establishment.

However, she feels that the place can be financially sustainable and grow with a steady flow of tourists in the neighbourhood.

She reveals that in March last year President Cyril Ramaphosa promised on national television to support The Place but it remains a promise.

"He was addressing residents at the Riverlea Empowerment Centre. I asked him about the meaning of this buzz phrase called 'economic empowerment for SMMEs'. I told him that all my life I have seen tourists passing on the Main Road in Coronationville and not stopping at historic sites like Rahima Moosa Hospital (Coronation), Dowling Avenue Primary School (formerly Madibane High School) in Westbury and Croesus Cemetery in Newclare where Walter and Albertina Sisulu are buried.

"They would ride through Noordgesig, also without stopping as they make their way to the famous Vilakazi Street in Orlando West.

"I told the president that The Place was established through passion for sport, especially football, out of my own pocket as an unemployed black woman, nogal. I need better infrastructure to upgrade the place and make the business more sustainable.

"So how about a tourism route that will include my business and this community that can do with some job creation projects?"

Notorious for its generations-old feuding gangs, Westbury is one of the neighbourhoods in the country with a problem of drugs, poverty and violent crimes.

But it's the same place that gave South Africa Steven Pienaar, who remains a source of inspiration for young people who want to escape these social ills and create better lives for themselves through sport and other positive passions.

The last editor of respected SA newspaper The Rand Daily Mail, Rex Gibson, has died, his family said on Tuesday
News
1 year ago

Dr Richard Maponya, 99, was the doyen of black business who established a reputation as a defiant entrepreneur who took on the might of apartheid ...
Opinion
1 year ago
Next Article