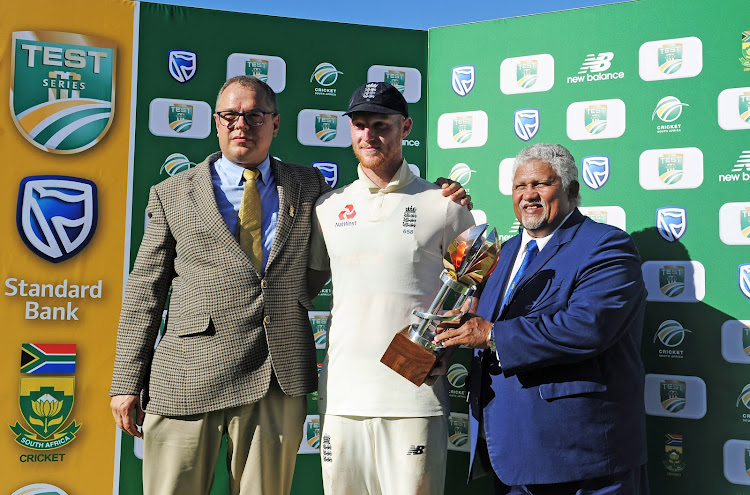 Ben Stokes (C) has had a memorable 2019.
Image: Ryan Wilkisky/BackpagePix

Ben Stokes was named ICC Player of the Year on Wednesday after a red-hot 12 months during which the all-rounder helped England to a maiden 50-overs Cricket World Cup crown.

Stokes smashed an unbeaten 84 in a heart-stopping World Cup final against New Zealand at Lord's, which ended in a tie before hosts England claimed the title on boundary count back.

The 28-year-old also hit 135 not out to secure an astonishing victory for England in the third Ashes test against Australia at Headingley.

"The last 12 months have been the best in my career, and I believe what we attained will be the catalyst to achieve further success over the next few years," Stokes said in a statement issued by the International Cricket Council (ICC).

Australia quick Pat Cummins pipped, among others, compatriots Steve Smith and Marnus Labuschagne to the Test Player of the Year award.

"It's a tremendous honour to be considered the best player of last year and one which was certainly unexpected," said Cummins, who finished the year as the top-ranked test bowler.

India opener Rohit Sharma was awarded ODI Player of the Year after smashing seven centuries, five of them in the World Cup, in the calendar year.

Compatriot Deepak Chahar's six wickets for seven runs in a 20-overs match against Bangladesh, the best bowling figures in that format, was adjudged the T20I Performance of the Year.

Labuschagne won the Emerging Player award while Richard Illingworth received the David Shepherd Trophy for Umpire of the Year.

India captain Virat Kohli, who swept the Player, Test and ODI Player of the Year awards for 2018, was named captain of both the ICC test and one-day teams of the year.

The 31-year-old also won the "Spirit of Cricket" award for urging the Oval crowd to stop booing Australian Smith, who was returning from a ball-tampering ban, during a World Cup match.

Greater game awareness will be crucial to South Africa’s prospects in the Under-19 Cricket World Cup that starts on Friday.
Sport
2 years ago

Former Proteas batting superstar AB de Villiers has stated his intention to return to the national team‚ but said there's a lot that needs to happen ...
Sport
2 years ago

Proteas speedster Anrich Nortje says SA will wait for the right moment to “rev it up” against England’s Jos Buttler when the third Test gets underway ...
Sport
2 years ago
Next Article