Veteran boxing official not under pressure 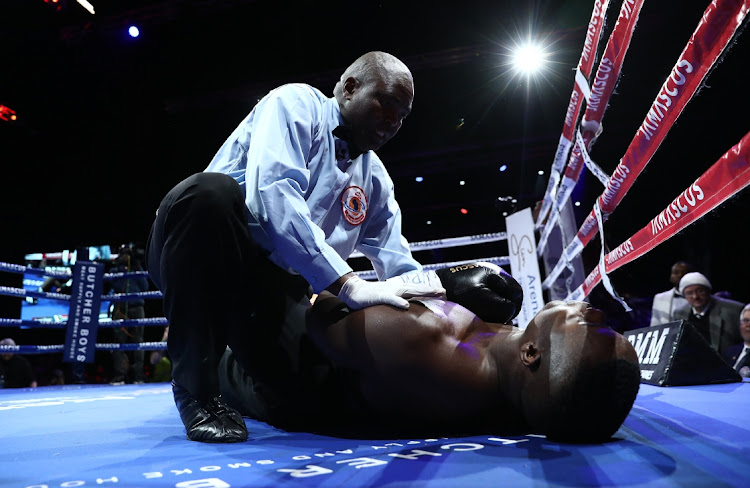 Referee Tony Nyangiwe looks at Justice Silinga who was knocked out on the first round by Ruan Visser during their SA & WBA Pan African Heavyweight bout at SunArena in Pretoria.
Image: Masi Losi

Tony Nyangiwe still remains humble despite having been around for more than two decades as a boxing official.

The 53-year-old from  Diepkloof, Soweto,  has officiated in a number of IBO titles fights yet he believes there is still room for improvement.

Nyangiwe has been appointed to be the third man inside the ring for the eagerly-awaited shoot-out between SA and IBO All Africa super middleweight champion Rowan "Braveheart” Campbell and Ryno “The Lion” Liebenberg which will headline Golden Gloves’ event dubbed "The D-Day” tournament at Emperors Palace on Sunday.

A lot has been said about this fight which has generated too much interest, especially after Liebenberg announced that he would donate his entire purse money (minus 25% which is the managerial fee to Colin Nathan) to children welfare organisations.

The war-horse invited his colleagues in the corporate world to book space on his boxer’s shot for publicity. The man – who runs a successful paint business in Cresta, northern Johannesburg, said those interested in the course would have their logos branded on his shots.

On the other hand, Campbell just wants to retain his belts, add the WBA Pan African strap and possibly get recognition internationally. Liebenberg and Campbell have promised to beat each other so bad.

Tension even affected the two boxers trainers. Pressure is also on them to read the fight well and give appropriate advise during breaks. That will determine the winner on the day.

There could also be nasty cuts based on the two boxers' style. This fight must be allowed to be fought until it ended and it was all these reason that it required a cool, calm and collected referee who will not allow the occasion and his emotions to overwhelm his understanding of this bloody spot.

“This fight will make me grow as a referee,” said Nyangiwe yesterday.

"Yes, I am not under no pressure because I will be doing what I have done all these years but still I feel there is something new that I will learn from it. You must remember that as a people we learn new things every day and that is exactly what I believe will happen to me during and after this fight. There is nothing like I have been around for many years so I know it all.”

It is unclear which title will be at stake and which rules will be applicable during the SA, IBO All-Africa and WBA Pan African super-middleweight ...
Sport
1 year ago

The long-held argument that styles make fights will be tested when right-handed sluggers Rowan Campbell and Ryno Liebenberg collide at Emperors ...
Sport
1 year ago