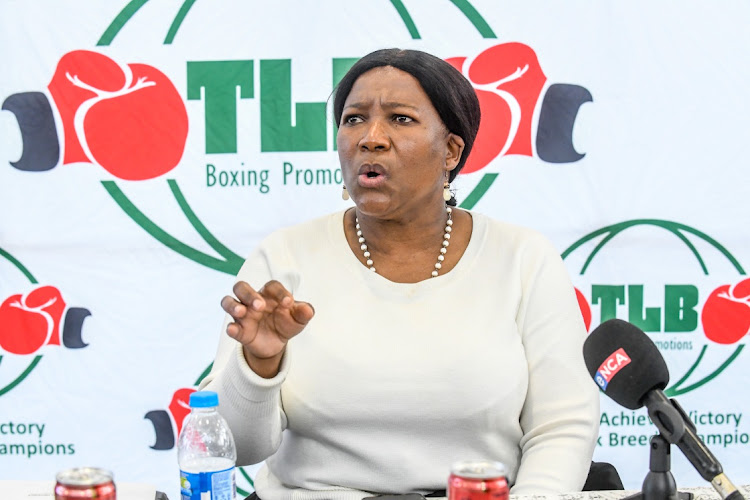 TLB Boxing Promotion of Joyce Kungwane has gradually become the second leading company to depend on in Gauteng. The other is Golden Gloves of Rodney Berman which has been around for over 40 years, while Kungwane shot into the scene in 2017.

When these two whisper that they are cooking something, rest assured that an announcement will be out in the public domain that action is in the offing. This is an honest observation which is not meant at undermining other promoters.

Since the government gave Boxing SA permission to organise matches under Covid-19 lockdown regulations – seven months after the hard lockdown in March last year – Berman and Kungwane have been very busy giving fighters action and opportunities to earn some money.

The first tournament under Covid-19 regulations was staged on October 10 by Berman at the Theatre of Marcellus inside Emperors Palace where Brandon Thysse won the WBA Pan African and the IBO All-Africa junior middleweight belts.

Seven days later, Kungwane was at Klipspruit Sport Centre in Pimville, Soweto, where Thulani Mbenge made a comeback after being inactive for over a year. He won the ABU welterweight belt.

On November 30, Berman was back in action in a tournament where Rowan Campbell stopped SA light heavyweight champ Nicholas Radley in the fourth round of their non-title catchweight fight.

Not to be outdone, Kungwane organised a tournament on December 18 at Kagiso Memorial Centre where Mbenge regained the SA belt from Mziwoxolo Ndwayana.

Campbell will headline Berman’s tournament on March 14 at Emperors Palace, where he will face his test of true character against warhorse Ryno Liebenberg.

Kungwane has already submitted her proposed date with all requirements, she said, for staging a tournament with BSA. She said her company intends to be at Graceland Casino in Secunda, Mpumalanga, on March 20.

She said long-forgotten Hekkie Budler will make a comeback. This boxer – who has held multiple world titles in two weight division – last donned boxing gloves competitively in 2018 when he lost the WBA Super junior flyweight belt to Hiroto Kyoguchi in Macao.

Kungwane said that Xolisani Ndongeni will also be in action after serving his 90-day suspension following his fifth-round knockout by Prince Dlomo in Kungwane’s tournament in Soweto. In making sure that female champions are also given opportunities to defend their title and earn a living, Kungwane says Noxolo Makhanavu will defend her flyweight belt against Smangele Hadebe.

Makhanavu last fought in 2017 when she retained her title with a short-route win over Portia Base in Mdantsane, Eastern Cape. While Berman’s tournament is definitely on, Kungwane’s is subject to BSA’ approval.

t is lamentable that South Africa – which commands massive respect in the boxing world – still has trainers, managers and promoters who seem not to ...
Sport
1 year ago