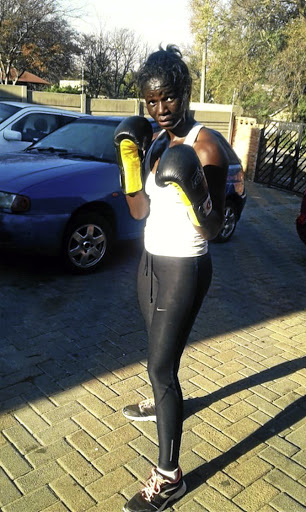 The dream of conquering the world as a boxer is fizzling out for Ellen "Tigress" Simwaka, who left home in Malawi for greener pastures in South Africa.

But she is now selling fat cakes for survival due to lack of action brought about by the lockdown. Simwaka can't even go home because international travel has been outlawed by lockdown rules.

She is trapped in a compound in Edenvale, East Rand, where she is not only battling to provide for her six-year-old daughter, but struggles to pay rent as well.

Her landlord has been kind to her by reducing her rent by half from R1,200. Her trainer Mimo Spirito has helped where he could but he, too, has his own challenges.

Simwaka's uncle, who is looking after her daughter, has reached out to her with an offer to buy her ticket to go back home since there is nothing happening here.

Looking after 25 professional boxers, pertaining to food and rent, has become a mammoth task for boxing manager and promoter Patrick Bonyeme.
Sport
1 year ago

"There was a bus provided to Malawians by the embassy but it could not take all of us because we were so many. I wanted to go back home and return when everything is back to normal. I had to think out of the box by selling fat cakes in the compound where I stay," she says.

"People are supportive. They buy, and that helps me to get few items but sending money home has become impossible because sales are not always good. The little money I make is also not enough to help me pay rent; it is tough."

She's one of many boxers in favour of boxing resuming behind closed doors. She came here in 2017 through Roger Kumwenda, who became her manager and provided shelter for her until they parted ways.

"I joined Rocky Weinstein in Edenvale and that is when I won the WBF International title. But he later stopped training fighters and I joined Spirito," she says.

"I keep fit by doing all types of exercises in my room."

Her career in SA started on a promising note, leading to her masterfully beating Smangele Hadebe for the WBF International bantamweight belt in July 2018.

But lack of fights after failing in her attempt to win the fully-fledged WBF belt from Bukiwe Nonina in August 2018, saw Simwaka forfeit her international title.

There is a grave concern from a large number of professional boxers who say that by the time President Cyril Ramaphosa announces the end of lockdown, ...
Sport
1 year ago

Conditions and financial remunerations are not healthy for timekeepers in South African professional boxing.
Sport
1 year ago

Boxing chief Tsholofelo Lejaka says the impact of having no activity in boxing arenas is not easy on all involved and the hardest hit remain the ...
Sport
1 year ago
Next Article